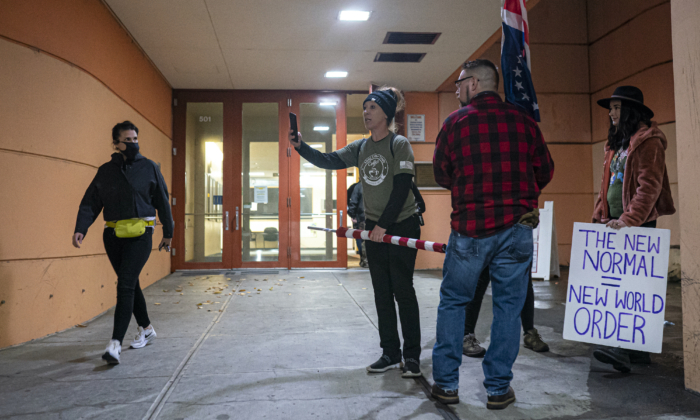 A masked attendee walks past anti-vaccine mandate protesters as they gather during a Portland Public Schools board meeting to discuss a proposed vaccine mandate for students in Portland, Ore., on Oct. 26, 2021. (Nathan Howard/Getty Images)
US News

Even as nations around the world are easing their pandemic restrictions, the Oregon Health Authority (OHA) on Jan. 28 adopted a permanent school mask mandate.

Since returning to in-person instruction last year, Oregon students have been required to wear masks at school except for removing them briefly when eating or during outdoor sports. That requirement was temporary, though, and expired after 180 days. The state adopted the “permanent” mandate in place of that temporary measure.

Masks will now be required in school settings until the rules are repealed.

As for when that might be, Oregon education officials say it depends on the course of the COVID-19 pandemic.

“The virus sets the timeline,” wrote the Oregon Department of Education’s Ready Schools, Safe Learners Resilience Manager Kati Moseley in a message to superintendents and school leaders on Jan. 28.

“OHA can rescind the masking requirements if it believes the rule or parts of the rule are no longer necessary to control COVID-19,” wrote OHA officials in response to concerns about what metrics might trigger a repeal.

Any person who violates the proposed rule will be subject to civil penalties of up to a $500 fine per day per violation.

The OHA action was taken despite vehement opposition expressed by more than 350 people during virtual hearings last week.

“Not one person in the hearings supported making the mandate permanent,” Lane County Commissioner Jay Bozievich told The Epoch Times.

The Alsea School District in rural western Oregon is refusing to comply.

Effective Jan. 31, it made mask-wearing optional—giving parents and teachers the freedom to decide whether a child should wear a mask except on school buses.

OHA responded by threatening to withhold pandemic relief funds for the district that serves about 1,000 students in K-12. And in a letter obtained by The Epoch Times, the Oregon Department of Education threatened the licensure of teachers and the accreditation of School District Superintendent Marc Thielman.

But Thielman says he is just following the science.

“OHA said that masking is effective at slowing the spread of Omicron when all the scientific studies say that it’s not,” Thielman told The Epoch Times. “When Samaritan Health Services in Oregon said that cloth and paper masks are no longer allowed in their facilities because of their low efficacy, we believed them. They’re the experts.”

In a Jan. 31 letter to Oregon Department of Education Director Colt Gill, Thielman explained that even the packaging that paper masks arrived in featured a disclaimer stating “Not Effective Against Viruses.”

He also said that his district was recently closed due to a COVID-19 outbreak that spread while everyone was still wearing masks at school.

“Given the harm that long-term masking does to our students, which has been acknowledged by the CDC, and the groundswell of scientific evidence and peer-reviewed studies about the efficacy of paper masks at controlling this virus, I believe that masks should be optional,” Thielman stated.

“Our School Board agreed and unanimously said we’re going to allow parents and teachers to decide whether they want a child to be masked, not OHA who doesn’t know that child,” he said.

Although health experts now believe that the masks that provide the best protection
against Omicron are N95 or KN95 masks, “kids won’t wear them and you can’t teach with them on,” Thielman said.

One other district in Oregon, the Adrian School District, previously lifted mask mandates despite the state rules.

After being handed four violations and a fine of more than $11,000, the district was forced back into compliance.

But Thielman, a Republican candidate for governor, says his district will not back down.

“They might withhold $275,000, but that’s a fraction of our budget,” he explained. “We knew they might do this, but we’ve made a lot of revenue over the past two years, so we’re fine,”

He said that enrollment has skyrocketed as the district continued to offer in-person instruction through the pandemic.

Thielman said a few parents have objected to the district’s change in policy and one student has been pulled from school.

Also pushing back against the mandate are members of the Oregon Moms Union (OMU), a grassroots political action committee comprised mostly of moms representing school districts around the state.

“There were several hours of testimony and thousands and thousands of emails sent by parents, asking them not to make this rule permanent,” MacKensey Pulliam, co-founder of OMU and wife of Republican candidate for governor Stan Pulliam wrote on the group’s Facebook page.

Within 24 hours of the permanent mask mandate announcement, members of OMU had sent more than 1,100 public comments to OHA, according to a statement by the group’s Facebook administrator.