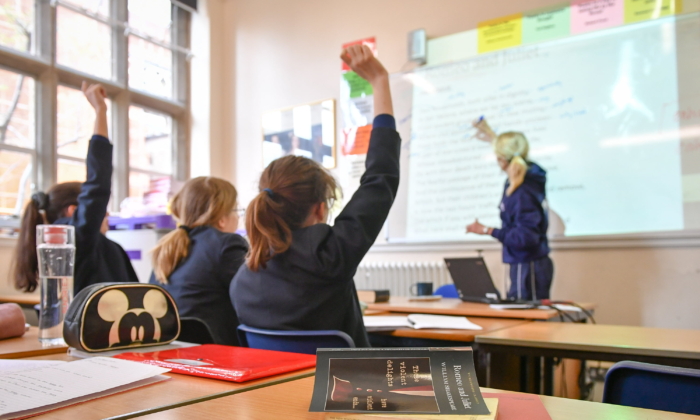 Students in a lesson at school (Ben Birchall/PA)
US News

A new poll suggests that Oregon voters are extremely dissatisfied with the state’s K-12 education system and would overwhelmingly support school choice.

Of 727 registered voters polled on June 1, just 25 percent of Democrats, 9.7 percent of Republicans, and 14.1 percent of independents believe that Oregon’s public K-12 education system is on the right track.

The poll, commissioned by the advocacy group Oregon Moms Union and conducted by Nelson Research, also suggests broad support for school choice across party lines, including 59.7 percent of Democrats, 84.5 percent of Republicans, and 77.4 percent of Independents.

School choice gives parents the right to use the tax dollars designated for their child’s education to send their child to the public or private school of their choice.

Only 24.3 percent of those surveyed oppose letting parents have the right to use their tax dollars the way that best serves their child’s needs. Only 3 percent had no opinion.

The results in Oregon mirror a national poll conducted by RealClear Opinion Research in February.

That survey of more than 2,000 registered voters found the concept of school choice enjoys overwhelming support, with 72 percent in favor of the concept and 18 percent opposed. The same holds true across party lines, with 68 percent of Democrats, 82 percent of Republicans, and 67 percent of Independents saying they support such a policy.

That’s up nearly 9 percent since the pandemic began.

“In light of the failures of the public education system navigating COVID, the recent trend of parents pulling kids out of public schools, and continued poor performance indicators, we wanted to know what the public’s appetite is for real education alternatives for parents,” said MacKensey Pulliam, President and Co-Founder of Oregon Moms Union.

“Many parents are already pulling their kids out of the public school system in Oregon so that they no longer have to co-parent with the government and can have choice in their child’s education,” Pulliam told The Epoch Times.

Oregon’s largest district, the Portland Public Schools is feeling the pressure. PPS projects that next year’s enrollment will be down 14 percent from pre-pandemic levels. Other districts around the state are experiencing a similar trend.

“Despite record funding levels, our graduation rates and student achievement remain stubbornly low,” she told The Epoch Times. “At the same time, what’s best for our kids too often takes a backseat to political agendas and the voices of parents are overridden by bureaucrats with too much power and misguided priorities.”

“We need to get back to basics in our schools … and focus on ensuring that our students know how to read, write, and do math,” she added.

If public schools can’t get that done, she supports school choice.

“Access to a classroom environment that best fits the needs of a student is essential to their ability to succeed,” Drazan continued. “For many students, the traditional classroom is just fine. For others, a charter school or other format might be more ideal.”

During the past two years, increasing numbers of parents have already “voted with their feet” for school choice, wrote Kathryn Hickock, executive vice president at the Portland-based Cascade Policy Institute.

Since the COVID pandemic began, 8.7 million children switched from public to private schools nationwide, she wrote on the advocacy group’s website.

The number of Oregon homeschooled students increased 73 percent between the last two school years, according to Hickock.

Nationwide, 11.1 percent of American households with school-aged children report they are now homeschooling. That’s double the percentage compared to before the pandemic, according to the U.S. Census Bureau.