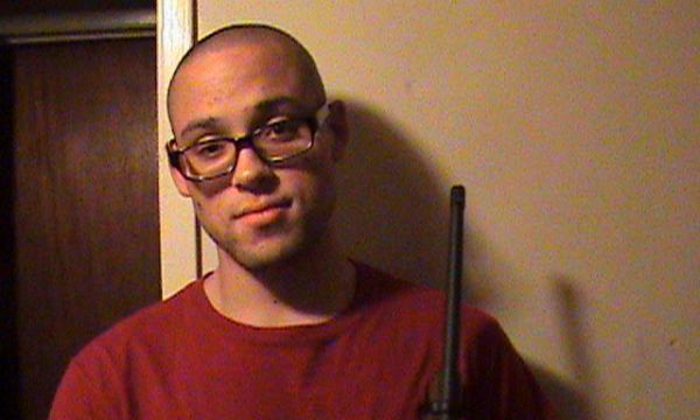 This undated photo from a MySpace page that appeared to belong to Chris Harper Mercer. (MySpace via AP Photo)
Crime and Incidents

ROSEBURG, Ore.—The gunman in last week’s rampage at an Oregon community college was wounded in a shootout with police officers before he killed himself in the classroom where his victims lay dead and wounded, authorities said.

It was authorities’ most detailed account yet of the death of 26-year-old Christopher Harper-Mercer, who killed nine other people at Umpqua Community College. The victims included his classmates in a writing class and the instructor.

When two plainclothes detectives spotted Harper-Mercer in the doorway of a campus building, he fired at them, and the officers quickly returned fire. The killer then went back inside and shot himself in the classroom, Douglas County District Attorney Rick Wesenberg said at a news conference Wednesday.

The detectives arrived within minutes of the first reports of gunfire at Umpqua Community College.

Seconds later, the officers “both felt they had a good target,” Wesenberg said. Two of their bullets hit a wall. A third struck Harper-Mercer on the right side.

The attack in this rural timber town was the worst mass shooting in Oregon history. Nine others were wounded in the Oct. 1 attack.

A private memorial has been held for Lawrence Levine, who was killed while teaching the class. Another private service was held Wednesday for 44-year-old Sarena Dawn Moore of Myrtle Creek. More funerals are scheduled through Saturday, and President Barack Obama arrives Friday to meet privately with grieving families.

Investigators have not yet shared any motive for the killings.

They have seized 14 guns — six found at the college and eight at the apartment Harper-Mercer shared with his mother on the outskirts of Roseburg.

Authorities have said the gunman’s mother told them her son was struggling with mental health issues, but no details have been released.

Harper-Mercer and his mother shared a love of firearms and would go to shooting ranges together.