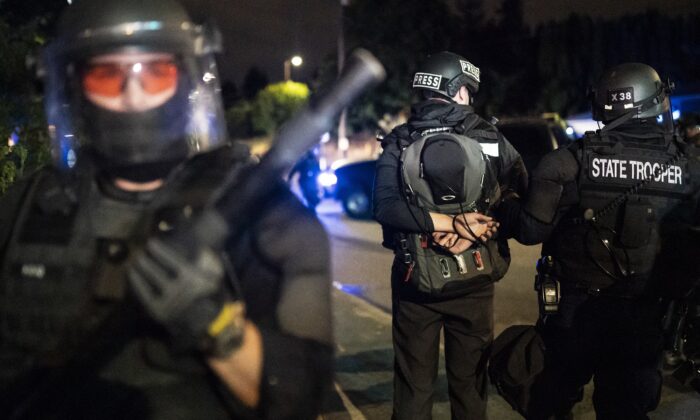 An Oregon State Trooper makes an arrest while dispersing a violent demonstration in Portland, Ore., on Aug. 30, 2020. (Nathan Howard/Getty Images)
US News

Oregon Gov. Kate Brown is sending state police back to Portland as part of an effort to end unrest that has continued virtually every night since May 28.

Oregon State Police troopers will send personnel and resources to the state’s largest city, Brown said in a plan released late Sunday. That will free up the Portland Police Bureau to arrest and charge people engaging in violent acts like arson and physical violence.

Brown is also calling on several law enforcement agencies to send officers to Portland, including the Clackamas County Sheriff’s Office.

“We all must come together—elected officials, community leaders, all of us—to stop the cycle of violence,” the Democrat said in a statement.

A supporter of President Donald Trump was shot Saturday after clashes between leftwing and rightwing demonstrators.

Brown blamed the shooting on Patriot Prayer, a conservative group that helped arrange a car caravan that drove through Portland, even though the victim may have been a member of the organization.

“The right-wing group Patriot Prayer and self-proclaimed militia members drove into downtown Portland last night, armed and looking for a fight. Every Oregonian has the right to freely express their views without fear of deadly violence. I will not allow Patriot Prayer and armed white supremacists to bring more bloodshed to our streets,” she said in a statement accompanying the new plan.

Patriot Prayer has only occasionally ventured downtown in recent months.

Joey Gibson, the founder of the group, didn’t immediately respond to an inquiry. In a statement on social media on Sunday, Gibson said he would not make any public statements until after relatives of the deceased, Aaron Danielson, also known as Jay, did. He has in the past denounced white supremacists who sought to affiliate themselves with his group.

“We love Jay and he had such a huge heart. God bless him and the life he lived,” he wrote.

Along with sending law enforcement to try to quell the unrest, the governor said she will convene a community forum with Mayor Ted Wheeler, black demonstration organizers, and community leaders to discuss “racial justice and police reform.”

“The group will create a venue for all community voices to come together, listen to each other, and co-create a just and peaceful future,” the governor’s office stated.

Demonstrators involved in the violence in recent months are calling for drastic measures, including sharp cuts to the city’s police agency and the resignation of Wheeler, who also serves as police commissioner.

Brown and Wheeler, both Democrats, have repeatedly rebuffed offers from President Donald Trump for federal assistance to respond to rioting. Wheeler on Sunday blamed the violence on Trump, prompting the president to call him a “wacky Radical Left” mayor. Brown said last week that Trump’s offers were “political theater.”

Wheeler told reporters at a briefing that he asked Brown for National Guard assistance twice but she declined both times.

The deal triggered demonstrators to target other buildings, including the bureau’s North Precinct.

State police withdrew on Aug. 13 in part because of the new prosecutorial policy of not pursuing some criminal charges against people involved in riots and protests, a spokesman told The Epoch Times.

Riots have taken place most nights since then. Some 911 calls have been placed on hold up to 20 hours because of a lack of personnel, as the city deals with a surge in violent crimes, according to police officials.

Portland Police Chief Chuck Lovell told reporters at the briefing that police “need additional resources” to deal with the mayhem.

Asked why the National Guard might be off the table, Lovell responded, “I don’t have a hesitancy one way or the other.”

Correction: A previous version of this article incorrectly described the timing of the shooting. The Epoch Times regrets the error.