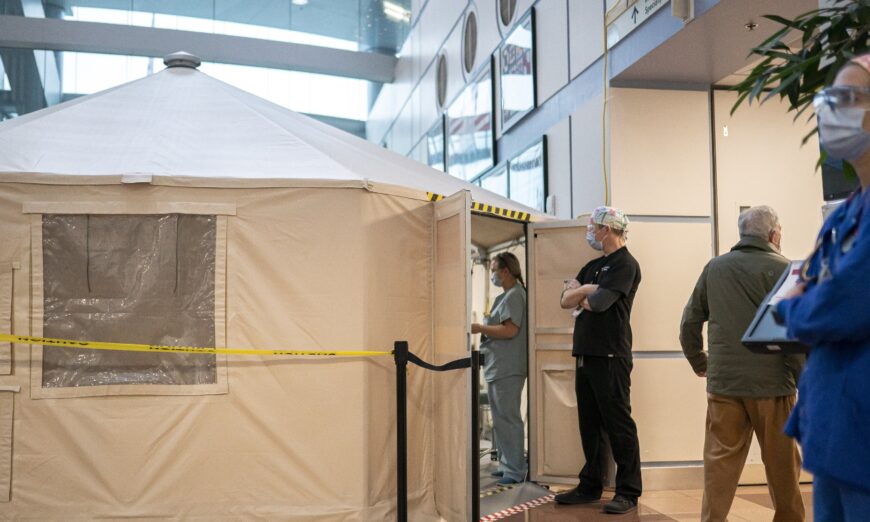 Healthcare workers in a healthcare facility in Portland, Ore., in a file image. (Nathan Howard/Getty Images)

A report promoted by the Oregon Health Authority (OHA) has been corrected after falsely claiming nearly 50 percent of children aged 12 to 17 who contracted COVID-19 required hospital treatment.

The Rede Group, which created the report for the authority, acknowledged the misinformation in a memorandum obtained by The Epoch Times.

“There was an issue with the numerator for hospitalizations in Figure 40 on page 180. When we calculated the percent hospitalized for each age group, we mistakenly thought the weekly hospitalization data from OHA were unique; they are not,” Danna Drum with the Rede Group told OHA in the memo. “We should have noticed this earlier and apologize for the error. Figure 40 has been corrected in version 1.1 of the report using data provided directly from OHA.”

“Thank you for your attention to the matter and we apologize again for this error,” Drum added.

The old version of the report claimed that 47.4 percent of children aged 12 to 17 who contracted COVID-19 required hospital care.

According to OHA data, that percentage is actually at or below 1 percent.

There was no indication in the report that it had been updated besides the addition of “(corrected)” to the graph’s title.

The Epoch Times asked OHA about the false claim, which led to OHA asking the Rede Group to examine the paper.

“The report has been updated with the correct data, and it has been reposted. You can find the new version of the report at the same link as before,” an OHA spokesman told The Epoch Times via email.

The Rede Group did not respond to a request for comment on the correction.

State Sen. Dennis Linthicum, a Republican, told The Epoch Times in an email that the false information showed “poor statistical analysis” and was part of a pattern “of using public money to stir-up vast quantities of statistics, data, and meaningless factoids which veils the malfeasance and parades the contempt which our bureaucratic elites exhibit toward Oregonians, and people in living in the United States.”

A bill passed by state legislators and signed into law by Democrat Gov. Kate Brown in March directed OHA to study how public officials in Oregon responded to the COVID-19 pandemic and produce three reports analyzing the response.

The legislation, Senate Bill 1554 (pdf), allocated approximately $900,000 in taxpayer money to the OHA for the purpose.

Proponents said the legislation would help identify how the public health response could be improved in advance of future crises.

“By beginning the After Action Report work this year, we will be better able to support public health investments and pave the way for future legislative action in the 2023 session. We must use this opportunity to learn meaningfully from this experience through a shared, iterative quality improvement process. We have a lot to learn and we must start now,” state Sen. Elizabeth Steiner Hayward, a Democrat who sponsored the legislation, said in a previous statement.

Linthicum was among the senators voting against the bill.

Linthicum said on the Senate floor that the report should include an assessment of the repercussions for widespread testing, including the testing of people who lacked symptoms, and an examination of how many businesses were closed due to the restrictive measures ordered by top officials.

Linthicum feels the entire first report, which runs 725 pages, was aimed at empowering the state by making it sound like the state did its best during the pandemic.

The report goes along with the storyline “that says, ‘oh, we had some deficiencies, we had some areas that needed improvement, but this was a good investment for Oregonians and we did our best,'” Linthicum said. “And that’s how you when you read the report, and given that insight to what the bill actually demanded of this reporting agency, you realize this is just trying to put lipstick on a pig.”

The lawmaker is trying to gather a grand jury to question key federal officials, including Centers for Disease Control and Prevention Director Dr. Rochelle Walensky, to answer questions about how they counted COVID-19 deaths during the pandemic and allegedly pressured hospitals to diagnose COVID-19 differently than similar diseases.

The case was dismissed this month by a judge that concluded Linthicum and the other plaintiffs lacked standing.

One component of establishing standing is showing an injury that must be traceable to an action by a defendant and plaintiffs “have failed to establish an injury,” U.S. District Judge Marco Hernandez, an Obama appointee, ruled.

The plaintiffs have appealed the ruling.

“We turned around and filed our paperwork to try and keep it alive,” Linthicum said.