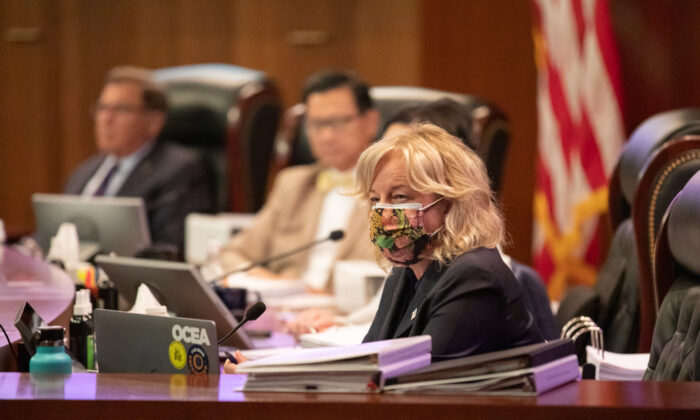 For the first time in more than four decades, Democrats hold a majority on the Orange County (OC) Board of Supervisors in Southern California. After trending “purple” for the past two decades, the county is moving directly into blue territory, increasingly leaving the “red” behind.

Democrats now have a 3-2 majority, after Supervisor Katrina Foley won reelection against former state Sen. Pat Bates. In March of last year, Foley won her seat in a special election, defeating former Supervisor John Moorlach. Also a former state senator, in the recent election, he lost a bid to become Costa Mesa’s mayor, Foley’s previous post. (Full disclosure: when he was in the Senate, I was his press secretary.)

Last June, District Attorney Todd Spitzer and Sheriff Don Barnes, both Republicans, won majorities to avoid November runoffs. They campaigned largely on preventing the county from becoming like crime-ridden Los Angeles. It will be interesting to see the dynamic they develop with the Democratic board majority on crime issues.

But the key, as always, is the county budget. On that, the new Democratic majority will be beholden to the unions who fund their campaigns.

According to VoteSmart, Foley received contributions of $9,300 each from:

I guess we know how Foley is going to vote on union issues.

As mayor of Costa Mesa until her promotion to supervisor, she presided over the worst balance sheet among Orange County’s 34 cities. Its Annual Comprehensive Financial Report (pdf) for the fiscal year ending June 30, 2021, showed an unrestricted net deficit of $244 million. That’s $2,203 per person.

The ACFR explains the deficit “primarily resulted from implementations of Governmental Accounting Standards Board (GASB) Statement Nos. 68, 71, and 73 for pensions, and GASB Statement No. 75 for Postemployment Benefit Other than Pensions (OPEB).” Those other benefits largely are for retiree medical care. Basically, Foley and the other Democrats on the city council padded city employee compensation so much it could prove unsustainable in a recession.

Orange County’s ACFR (pdf) for the same fiscal year showed an unrestricted net deficit of $3 billion, or $947 per person. So Foley and the other supervisors will have some room to work with there to decrease the county’s position down to Costa Mesa’s level.

How bad could it get? How high could compensation increases go for OC employees? Well, on Nov. 29, the Los Angeles City Council approved, in an 11-0 vote, huge pay raises for employees at the Department of Water and Power.

“Under the agreement with the International Brotherhood of Electrical Workers Local 18, roughly 10,000 workers will receive four ‘cost of living’ pay increases totaling at least 10 percent and as much as 24 percent by October 2025, depending on inflation,” the Los Angeles Times reported.

“All workers will also get a one-time cash bonus of 3 percent of their salary in December.

“More than 800 utility line workers and electrical mechanics will get four additional raises. Those separate packages range from at least 20 percent to as much as 41 percent.”

The inflation, of course, results from the wild, multitrillion-dollar spending spree of another Democrat, President Joe Biden, and the Democratic Congress of the past two years. Meanwhile, few in the private sector are getting 41 percent raises—even though we pay the taxes for all that largesse to government workers.

All this is occurring as the recession is digging in. Both the technology and housing sectors are crashing statewide.

What’s going to happen? I think the temptation will be inevitable for OC supervisors to put a tax increase on the ballot. The precedent is the 1994 bankruptcy, in which Moorlach played a major part, first warning about the impending disaster, then repairing the damage as the appointed treasurer-tax collector.

He recalled those events in 2019 in a 25-year retrospective:

“The economy controls what the government can do. When local government bureaucrats and elected officials believe they can rely on rosy economic trends, that’s when a fiscal calamity is just around the corner. It’s a classic case of the tail wagging the dog.”

The knee-jerk response at the time was Measure R, a half-cent sales tax increase. Voters defeated it.

But now? With a “blue” board majority, and voters trending Democrat? And with the public-employee unions more powerful than ever, funding a “Yes” campaign to make sure their lucrative pay, perks, and pensions aren’t cut? It could pass.