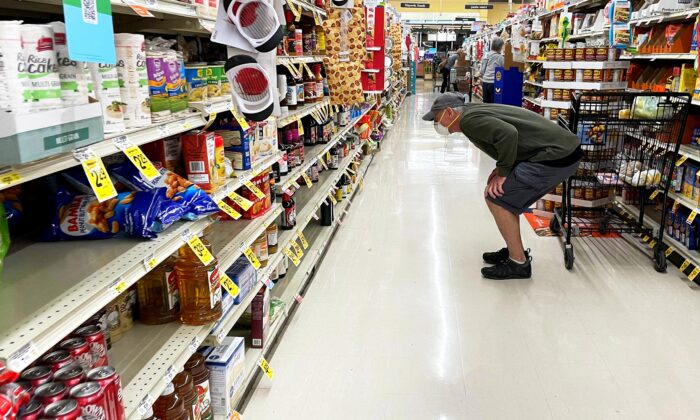 A man shops at a Safeway grocery store in Annapolis, Maryland, on May 16, 2022. (Jim Watson/AFP via Getty Images)
Inflation

Optimism among business leaders regarding the outlook of the U.S. economy has drastically declined in the past year, according to JPMorgan’s 2022 Business Leaders Outlook Pulse, released Monday.

More than 1,500 midsize business leaders participated in the survey (pdf), which was conducted between May 25 and June 10 across executives of midsize companies in the United States that have annual revenues from $20 million to $500 million.

It found that just one in five business leaders, or 19 percent, said they were optimistic about the national economy for the year ahead, representing the lowest percentage recorded in the 12 years that the survey has been conducted by JPMorgan. That figure is also down significantly from 75 percent one year ago.

Amid the decline in optimism, the survey showed that pessimism around the national economy jumped to 51 percent from 10 percent a year ago amid soaring inflation and interest rates and ongoing supply chain issues and labor shortages.

Among those surveyed, 99 percent reported that their costs of doing business have increased in the past year, with 71 percent stating that their top challenge is rising costs, including inflation.

Labor issues, including recruiting, hiring, and retaining employees and labor shortages, came in at 70 percent, while 86 percent of respondents said that they believe inflation is worse than it was six months ago, along with interest rates at 65 percent.

Inflation is currently sitting at a 40-year high in the United States, which has forced many businesses to pass those higher costs onto customers.

Of those surveyed by JPMorgan, more than three-quarters of businesses (76 percent) said they are raising prices, with 42 percent stating they have passed at least half of their increased costs to consumers via increased prices.

That trend is unlikely to disappear any time soon, according to the survey, which found that 81 percent of respondents are likely to keep raising prices in an effort to offset higher costs.

Despite the gloomy outlook, 73 percent of those surveyed said they expect increased revenue or sales for the year ahead, while 71 percent are optimistic about their company’s performance.

The survey comes shortly after a poll by Morning Consult found that optimism about the future of the United States is waning among adults.

According to that survey, which was conducted on a representative sample of 2,210 U.S. adults between June 16–20, just 45 percent of respondents said they were “very optimistic” or “somewhat optimistic” about the future of the country, marking a new record low.

Inflation, which the Biden administration has largely blamed on Russia’s invasion of Ukraine, has seen prices soaring in the United States, driving up the costs of everyday essentials including food and fuel.

On June 22, Federal Reserve Chairman Jerome Powell told the Committee on Banking, Housing, and Urban Affairs that the country faces an “uncertain” economic environment and that more inflation “surprises” could be on the horizon in the future.

A number of economists and experts, including those at Deutsche Bank and Morgan Stanley, are forecasting a recession in the near future.

“The first half of 2022 has really tested business leaders with pricing pressures and increased interest rates, on top of the supply chain- and labor-related issues they were already facing,” said Ginger Chambless, head of research at JPMorgan Chase Commercial Banking.

“While it’s surprising to see how drastically sentiment has shifted, it is important to note that business leaders are still mostly upbeat when it comes to their companies and areas that they can more directly control.”