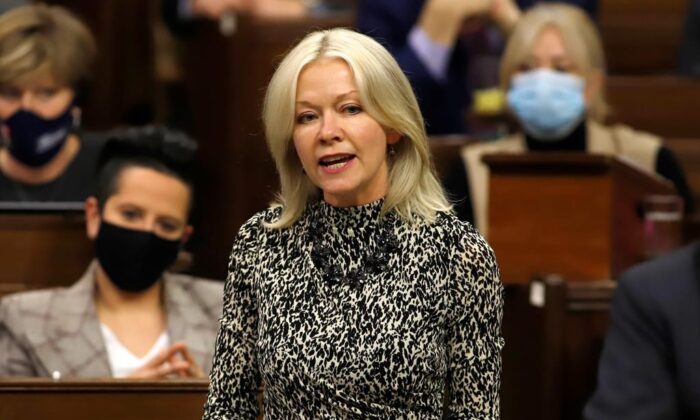 Prime Minister Justin Trudeau faced off familiar calls from the official opposition to drop pandemic mandates during question period today, but this time they leveraged the words of a dissenting Liberal MP who broke ranks this morning by heavily criticizing COVID-19 restrictions and calling for their dismissal.

Interim Conservative Party Leader Candice Bergen said her party “could not agree more” with dissenting Liberal MP Joël Lightbound, who she said “clearly and strongly stated it’s time to end the divisiveness and the politicization and end the mandates.”

“This cannot be a slow and dragged-out process simply because of the Prime Minister’s ego, pride, or denial,” Bergen said. “Canadians are too tired. Canadians need hope. So will the prime minister follow the science, follow the evidence, end the restrictions, end the mandates?”

Trudeau acknowledged that people are tired of pandemic-related restrictions, but said that his government will “continue to follow the science” on appropriate health measures.

“Everyone is sick and tired of lockdowns, of the measures we have to do, of the sacrifices we’ve had to make, but Canadians have continued to step up over the past two years, been there for each other, been there to get vaccinated,” Trudeau said.

Trudeau has yet to comment publicly on Lightbound’s future within the Liberal Party. Lightbound announced this afternoon he was resigning from his role as chairman of the party’s Quebec caucus.

Trudeau previously expelled Jody Wilson-Raybould and Jane Philpott from the Liberal caucus after they dissented over the SNC-Lavalin scandal in 2019.

Wilson-Raybould welcomed Lightbound’s decision to take a different stance than his government, writing on Twitter today the move shows “Glimmers of democratic independence from MPs in Ottawa.”

Addressing Lightbound’s statements and allegations, Trudeau said in a media scrum on Feb. 8 that “mandates are the way to avoid further restrictions” and that his government would remain focused on that approach.

In his solo press conference earlier today, Lightbound enumerated all the suffering caused by restrictive COVID-19 measures as shared by constituents and citizens and called for the government to draw a roadmap to full re-opening, to provide the data that justifies restrictions, and to fulfill the federal health transfers to provinces and territories to build health care capacity.

The dissenting MP also said that his party had made a conscious decision to use the issue of vaccination as a wedge in the last federal election, hence dividing and stigmatizing Canadians.

“I can’t help but notice with regret that both the tone and the policies of my government changed drastically on the eve, and during, the last election campaign,” Lightbound said in a press Feb. 8 conference.

“From a positive and unifying approach, a decision was made to wedge to divide and to stigmatize. I fear that this politicization of the pandemic risks undermining the public’s trust in our public health institutions.”