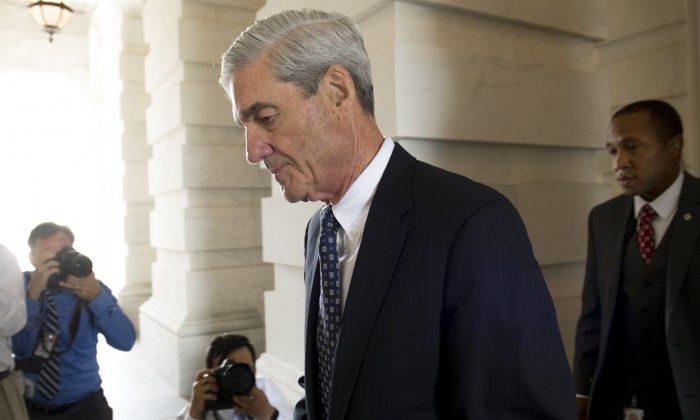 Since the 2016 presidential election, the Democrats have been peddling the conspiracy theory that President Donald Trump’s campaign coordinated with the Russians in secret to win the race. More than a year into Trump’s tenure, many Democrats still believe that the Trump presidency is illegitimate and there is hope for Hillary Clinton to become the rightful president of the United States.

Special counsel Robert Mueller’s Russian probe helps fuel the Democrats’ fantasy. When Mueller brought charges against former Trump associates Mike Flynn, Paul Manafort, and Rick Gates, the Democrats were ecstatic, oblivious to the fact that the charges had nothing to do with the Russian collusion. But the latest indictment unsealed on Friday will almost certainly take the wind out of the Democrats’ sails.

The indictment alleges 13 Russian citizens and three Russian entities meddled in the 2016 presidential election. One of the entities is called the Internet Research Agency (IRA), a St. Petersburg-based social media troll farm. At one time, IRA assigned as many as 80 employees to interfere with the U.S. election, states the indictment.

There are three important takeaways from the indictment.

First, the so-called “Russian influence campaign” started long before Trump announced his candidacy. According to the indictment, IRA launched a “translator project” in April 2014, which “focused on the U.S. population and conducted operations on social media platforms such as YouTube, Facebook, Instagram, and Twitter.”

About a month later, IRA’s strategy “included interfering with the 2016 U.S. presidential election, with the stated goal of ‘spreading distrust towards the candidates and the political system in general.’”

This suggests the ‘Russian influence campaign’ is not about supporting a particular candidate, but more likely a long-term Russian strategy.

Trump did not throw his hat in the ring until June 16, 2015. This suggests the “Russian influence campaign” is not about supporting a particular candidate, but more likely a long-term Russian strategy. It seeks to spread misinformation and manipulate public opinion, aiming at undermining our civil society and national security.

Second, the accused Russians promoted division and tried to amplify tension in America. The indictment alleges IRA instructed its employees to build “political intensity through supporting radical groups, users dissatisfied with [the] social and economic situation and oppositional social movements.”

For example, the indictment alleges that the Russians attacked senators Marco Rubio and Ted Cruz on social media during the Republican primaries; they favored Sen. Bernie Sanders over Hillary Clinton in the Democratic primaries. The Russians probably wanted to prolong the in-fighting of the Republicans and Democrats.

Some Russian-linked fake social media accounts ostensibly supported a secure U.S. border, while others promoted Democrat-aligned messages. One fake group on Facebook called United Muslims of America had favorable views of Hillary Clinton. One fake Twitter handle, @Blacktivist, aligned itself with the Black Lives Matter movement. There was also a group called “Army of Jesus.”

All these examples suggest that the Russians did not necessarily favor any candidate. In fact, they were quite opportunistic in backing or opposing both Trump and Hillary Clinton. They seemed to be not interested the U.S. domestic politics, except to inflict damage and cause disruption.

Third, there was no witting collusion between the Trump campaign and the accused Russians. The “Russian influence campaign” did not sway the election outcome, either.

Deputy Attorney General Rod Rosenstein said that the indictment did not include any allegations that any American or members of the Trump campaign “was a knowing participant in the alleged unlawful activity.” He also said that “there is no allegation in the indictment that the charged conduct altered the outcome of the 2016 election.”

The court document indicates some defendants “posing as U.S. persons and without revealing their Russian association, communicated with unwitting individuals associated with the Trump Campaign and with other political activists to seek to coordinate political activities.”

We can infer from the indictment that the defendants failed to get a response from the Trump campaign. Otherwise, any correspondence or meetings would be used as evidence against the Russians. There is no mention of communication of any sorts between the impostors and the Trump campaign, indicating such events did not take place.

In summary, the Russians sought to influence the 2016 campaign but failed utterly. However, they succeeded at least in one thing: The discord they sowed indeed blossomed. The Democrats failed to turn up any material evidence of Trump colluding with Russia but have tried everything in their power to keep the narrative of collusion alive. If the Russians have any U.S. collaborators, it is the Democrats.