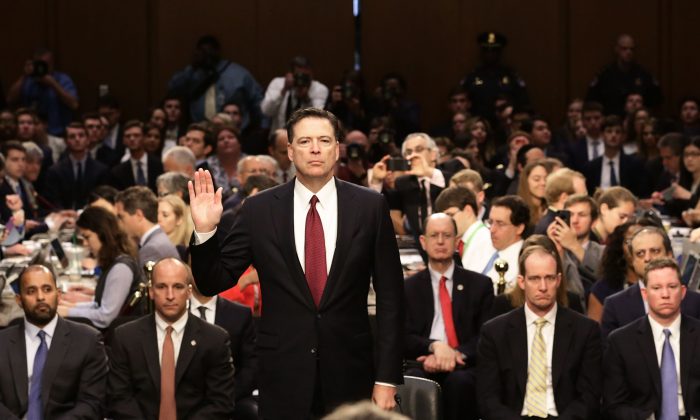 The FBI and DOJ invented the narrative of Trump–Russia collusion

After special counsel Robert Mueller handed down his indictment against 13 Russians and three entities on Feb. 16, a strange thing happened. As if having received orders, nobody in the mainstream media talked anymore about how “Trump colluded with Russia,” a topic the media had obsessed about for more than a year.

This, of course, does not mean the media outlets suddenly realized they had embarrassed themselves. The pundits instead made up new attack lines against Trump. The latest consensus on the left is that Russian meddling in the 2016 presidential campaign is an “act of war,” comparable to Pearl Harbor and the 9/11 terrorist attack. Trump’s inaction and incompetence, the pundits charged, were not acceptable.

Only they seemed to forget one thing: The Russian meddling took place mostly on President Barack Obama’s watch. They were also oblivious to other meddling actors under Obama: the FBI and Department of Justice.

The agencies tried to protect Hillary Clinton and to undermine her opponent. Moreover, in case they failed to stop Trump, they had an “insurance policy” in place to ruin his presidency. The “Russian influence campaign,” compared to the FBI and DOJ meddling, pales into insignificance.

In 2013, Uranium One, a company possessing 20 percent of the uranium production capacity in the United States, was acquired by Rosatom, a Russian state-owned company. The acquisition was unanimously approved by a government committee of nine agencies, including the State Department, which was headed by Hillary Clinton.

The FBI and DOJ had evidence of wrongdoing by Rosatom personnel on U.S. soil as early as 2009, but Congress and the rest of the administration were not informed of the illegal schemes. If that criminal conspiracy had been known, the deal would likely not have been approved.

The Clinton Foundation received millions of dollars of donations from individuals linked to Uranium One and failed to disclose the donations. In addition, Bill Clinton was paid hefty speaking fees by a Russian bank with ties to the Kremlin shortly after the Uranium One deal went through.

The FBI launched an investigation in 2015. When this issue was brought up again during the 2016 presidential campaign, senior FBI and DOJ officials essentially terminated the case out of concern that  FBI agents making waves with an investigation could affect the election, according to The New York Times. Hillary Clinton’s political career is more important than truth and justice to the FBI and DOJ.

Here’s the kicker: Comey started preparing the exoneration statement sometime in April or early May in 2016. Long before the end of the investigation, Comey concluded Hillary Clinton was innocent. There are two justice systems in the United States: one is for the Clintons, the other for everyone else. The Clintons flout the law; the average Joe gets thrown into jail for making false statements to the FBI.

To stop Trump, the FBI and DOJ invented the Trump-Russia-collusion storyline. After Trump won, the story was used to undermine his presidency.

The FBI and DOJ based their case against Trump solely on the “salacious and unverified” Steele dossier, as Comey said in testimony given in June 2017. That political hit job was funded by the Hillary Clinton campaign, Democratic National Committee, and the FBI. All involved tried to hide this fact until it was outed by the congressional Republicans.

The FBI and DOJ obtained FISA warrants against Trump’s associates with the dossier as the core evidence. The FISA court rejected an application to surveil Carter Page in July 2016. But in October, it granted a warrant, which was then renewed four times.

Paul Manafort, former Trump campaign chairman, was apparently targeted as well. Some of his conversations with Trump may have been wiretapped by the FBI, according to former Director of National Intelligence James Clapper.

The FBI and DOJ did not give up when Trump beat Hillary Clinton: Robert Mueller was appointed special counsel. But his investigation is going nowhere. It is true that he has charged some of Trump’s former associates, some of whom have even pleaded guilty. However, the charges have nothing to do with Russian collusion.

The indictment against the Russians is almost a joke: everyone knows there is not going to be a trial. Mueller’s failure even prompted some hardcore leftists to question the validity of the Trump-Russia-collusion story.

Russians did not protect and exonerate Hillary Clinton. The FBI did. She was able to maintain her candidacy and then lost fair and square.

Russians did not use the Steele dossier as evidence to surveil Trump’s associates. The FBI did. Without verification, the FBI used the smear document to apply for permits to surveil associates of a major presidential candidate, lying to the FISA judges along the way.

Russians did not tap into Trump’s phones. The FBI did. Using the national intelligence apparatus to eavesdrop on a political opponent is a new low for the federal government.

Russians did not appoint Mueller to launch a futile witch hunt in order to hurt a duly elected president. The DOJ did, and the mainstream media cheered them on.

Now the media is telling us the low-budget Russian ad campaign on social media is more consequential, but this claim will soon go the way of the tired accusations of collusion.