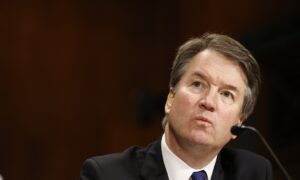 Coming Soon to a Theater Near You: ‘Kavanaugh II’
0 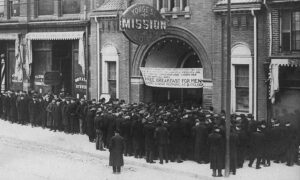 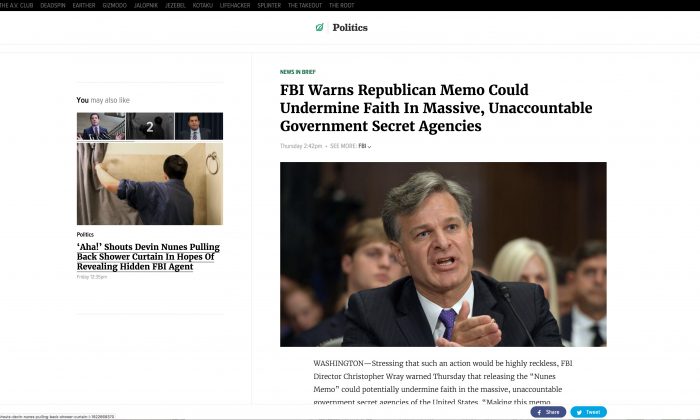 A screenshot of the Onion's politics section of their website. (theonion.com)
Viewpoints

OPINION: For Accurate Reporting on the Nunes Memo, Look to The Onion

The so-called Nunes memo, written at the direction of the chair of the House Permanent Select Committee on Intelligence, Devin Nunes (R-Calif.), to describe abuses in government surveillance carried out against the campaign of President Donald Trump, was finally released on Feb. 2.

One day before the Nunes memo was released, the satirical news website The Onion tweeted this:

On the same day, The New York Times and The Washington Post both warned against publicizing the memo. Sometimes life imitates The Onion.

How times have changed. The Times published the Pentagon Papers and went to court to defend its actions. The Post unraveled the Watergate scandal.

In order to stick it to the current resident in the White House, however, they have both advocated keeping the American people in the dark this time. Suddenly, for the Times, news perceived to be in favor of Trump is not fit to print; for the Post, democracy thrives in darkness. At least The Onion is consistent.

When I saw the memo, I was a little disappointed. It did not contain much information that was not already widely circulated in the news media. This was the document that the Democrats fought tooth and nail against releasing? There were no sources and methods revealed, as the Democrats charged. I didn’t see how anything in it could compromise national security. The obstruction from the Democrats exposed their true colors: saving their own skin is more important than justice, transparency, and the rule of law.

What the Memo Says

Nonetheless, the memo provides an official confirmation that surveillance abuses were committed by senior officials of the FBI and Department of Justice (DOJ). Here’s a synopsis.

The major evidence against Page that the FBI and DOJ presented to the FISA court was the infamous Steele dossier, a minimally corroborated political hit job partially funded by the Democratic National Committee and the Hillary Clinton presidential campaign. The memo alleges that the dossier was so crucial that McCabe admitted in a congressional hearing that without it, FISA warrants against Page would not have been sought. The FBI and DOJ also cited news stories from Yahoo News to bolster their case.

Comey, McCabe, Yates, Boente, and Rosenstein were aware the dossier was a result of opposition research, not a product from the American intelligence community. They also knew the author of the dossier, Christopher Steele, was “desperate” to get Trump, according to the memo. When the dossier was presented to the FISA court, however, the source of the memo and the animus against Trump were withheld from the judges. The FBI and DOJ also failed to tell the judges a news story used to support the application had been intentionally planted by Steele himself.

Attempts to Discredit the Memo

The Democrats and their media allies kicked into high gear immediately after the Nunes memo was released. Citing anonymous sources, The New York Times and The Washington Post attempted to discredit the Nunes memo. At the same time, the House Democrats drafted their own memo to respond to the Nunes memo. Apparently, they couldn’t wait to release their memo through official channels, so they chose to leak it to the media.

The New York Times criticized the claims made in the Nunes memo:

“The F.B.I. told the court that the information it received from Mr. Steele was politically motivated, though the agency did not say it was financed by Democrats, according to two people familiar with the Democratic memo.”

“The court that approved surveillance of a former campaign adviser to President Trump was aware that some of the information underpinning the warrant request was paid for by a political entity, although the application did not specifically name the Democratic National Committee or the Hillary Clinton presidential campaign, according to two U.S. officials familiar with the matter.”

But I think the Times and the Post misfired. The reports of the two newspapers affirmed that the Steele dossier, which former FBI director James Comey had testified was “salacious and unverified,” was used as evidence by the FBI and DOJ to get FISA warrants.

The fact the smear document was admitted by the court and the warrants were granted suggests how badly broken the system is. At a minimum, Comey, McCabe, Yates, Boente, Rosenstein, and the FISA judges demonstrated exceptionally poor judgment, which begs the question if they were sufficiently competent at their jobs. A less charitable take is the FISA warrants against Page were part of a larger scheme concocted by the top echelons of the FBI and DOJ to take down Trump.

The withheld information could have been potentially favorable to the target of the FISA application. In addition, the government cited news stories planted by Steele as supporting evidence. The FBI and DOJ knew that citing a news story supporting the dossier whose only source was the information in the dossier was a form of deceit, but did not make a sound about it to the court. This suggests they had the intent to mislead the judges. In other words, the Times, the Post, and the Nunes memo agree the FBI and DOJ lied to the FISA court in the Page case.

Nunes told Fox News that the memo was only “Phase One.” In Phase Two, the House Intelligence Committee will investigate the involvement of the State Department in the surveillance abuse saga. It is not yet clear if other institutions of the government are implicated. The American people should demand more government disclosure, not less.