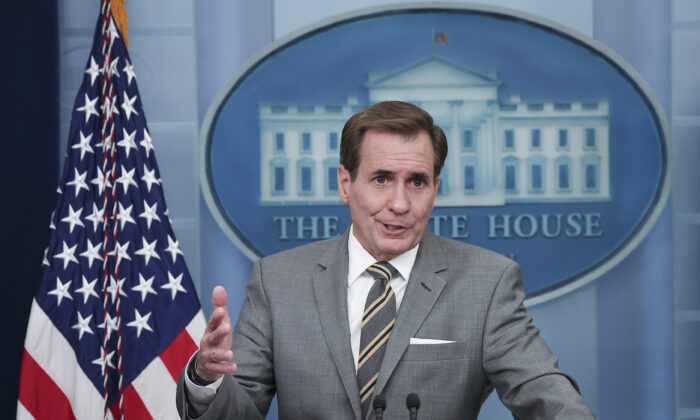 OPEC+ member states lined up on Oct. 16 to endorse a steep production cut agreed upon this month following accusations from top Biden administration officials against the Saudi government.

Iraq, the second-largest producer in OPEC, said the move was based on economic indicators and done unanimously.

“There is complete consensus among OPEC+ countries that the best approach in dealing with the oil market conditions during the current period of uncertainty and lack of clarity is a pre-emptive approach that supports market stability and provides the future the guidance it needs,” Iraq’s state oil agency said in a statement.

Oman and Bahrain also said in separate statements that OPEC+ had been unanimous in deciding on the 2 million barrels per day reduction several weeks ago. Algeria’s energy minister called the Oct. 5 decision “historic,” and he and OPEC Secretary General Haitham Al Ghais, currently visiting Algeria, expressed their full confidence in it, Algeria’s Ennahar TV reported.

Those statements came after White House and Pentagon spokesman John Kirby accused Riyadh of pushing other countries into making the oil production cut during the last OPEC meeting.

“The Saudi foreign ministry can try to spin or deflect, but the facts are simple. The world is rallying behind Ukraine in combating Russian aggression,” Kirby said in a statement last week, claiming that “more than one” member of OPEC+ disagreed with the oil production cut. He didn’t provide examples, however.

But the Saudi kingdom rejected those allegations, saying that those statements “are not based on facts” and that it had made its decision “purely on economic considerations.”

“The government of the kingdom clarified through its continuous consultation with the US administration that all economic analyses indicate that postponing the OPEC+ decision for a month … would have had negative economic consequences,” the Saudi energy ministry stated last week.

Some Democrats, including Sen. Chris Murphy (D-Conn.), indicated that the United States should send missile systems meant for Saudi Arabia to Ukraine instead—as a retaliation for the oil cut. President Joe Biden, too, told a reporter this month that the Saudis would face punishment, although he didn’t say how.

“If Saudi Arabia isn’t willing to take the side of Ukraine and U.S. over Russia, why should we keep these Patriots in Saudi Arabia when Ukraine and our NATO allies need them?” Murphy wrote on Twitter. “We should remove these Patriot batteries from Saudi Arabia and move them to either Ukraine, or NATO partners who have transferred weapons to Ukraine and need to backfill defense systems.”

The war of words comes as decades-high inflation and elevated gas prices have been eating away at Democrats’ approval rating ahead of the November elections, where analysts have predicted that the GOP is expected to at least take back the House.