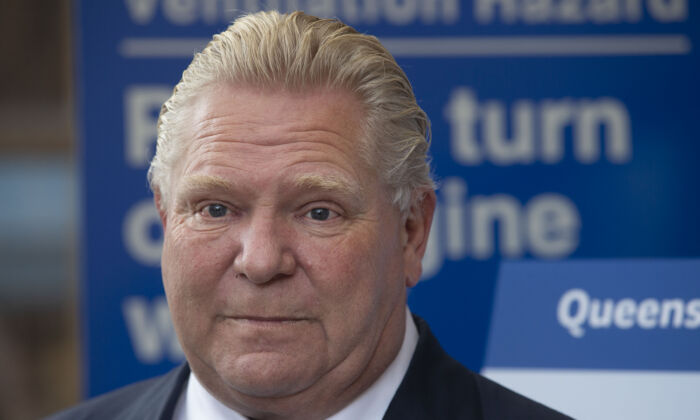 Ontario Premier Doug Ford says that the province will invest billions of dollars to build a new hospital in Mississauga, Ont., and expand another one in Toronto.

Speaking at a press conference on Dec. 1, the premier announced the multi-billion-dollar project is the largest single hospital infrastructure investment in Ontario history and will add over 500 hospital beds to the health care system.

“It’s a plan that will protect our progress in our fight against COVID-19, but also looks beyond, to the Ontario we want to build in the future for our kids and our grandkids,” Ford said. “It’s a plan that will bring investment and spur economic growth. And with that growth, more people and workers will come to our great province, seeking the opportunities that Ontario has to offer.”

To support the expansion of the health care system, Ontario is investing $30.2 billion over the next 10 years to build or expand hospitals across the province, which Ford says will not only be in the big cities, but also for towns and smaller communities.

The Ontario government said in a news release on Dec. 1 that the new Mississauga Hospital is expected to include one of the largest emergency departments in Ontario, an increased number of operating rooms, and an additional 350 beds.

The plan will also include a new inpatient care tower at the Queensway Health Centre used to centralize care and rehabilitation services for patients, while also adding over 150 new beds.

These important hospital infrastructure projects will help meet the health care needs of patients and families in Peel Region, Etobicoke, and the surrounding areas by reducing wait times, the statement says.

Ford’s announcement of the health care project came hours after the federal government announced more countries to be added to the list of nations to face travel restrictions to Canada, as well as new testing requirements on all air travellers entering the country, as part of the effort to protect against the new “Omicron” variant of the CCP (Chinese Communist Party) coronavirus.

Egypt, Nigeria, and Malawi were added to the list of seven other countries originally facing travel restrictions, including South Africa, Mozambique, Namibia, Zimbabwe, Botswana, Lesotho, and Eswatini. Starting Dec. 1, travellers will not be allowed entry into Canada if they have been to these countries in the past 14 days.

Ford told reporters that he welcomes the federal government’s travel restrictions, and that he is pleased with Ottawa’s quick response to his call on Nov. 26 to ban flights and passengers from the countries of concern, following the discovery of the Omicron variant in the province.

“We welcome the actions from the federal government and I want to thank the feds for taking action today,” he said.

“Every day we learn more about the Omicron virus, about how quickly it can spread and how severe it may be,” Ford said. “Every day we hold off on more cases entering our country, the more time we have to learn and prepare. So the best thing we can do right now is to fortify our borders.”

Ford added that while the discovery of the Omicron variant in the province is a “cause for concern,” it is not a “cause for panic.”

As of Nov. 30, Canada has confirmed seven cases of the Omicron variant, with four cases detected in Ontario. Alberta, British Columbia, and Quebec each have one case related to the new variant.

New border testing requirements are also in place for all air travellers coming from outside Canada, with the exception of the United States. Fully vaccinated travellers will be required to quarantine while they wait for the result of their arrival tests.