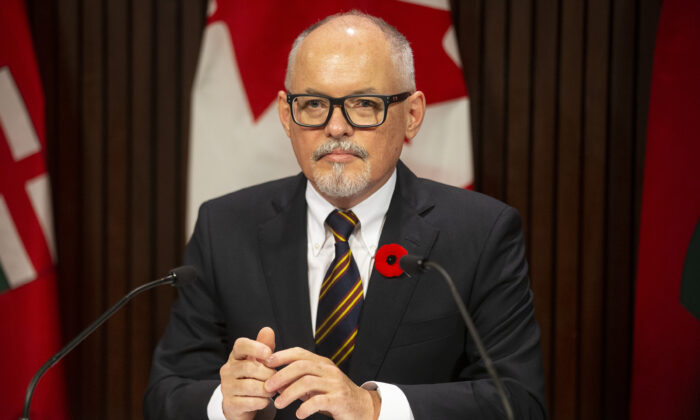 Ontario is pausing the lifting of capacity limits for remaining indoor “higher-risk settings” as a preventative measure due to an increase in COVID-19 cases, the province announced on Nov. 10.

The province says that while it has one of the lowest rates of active cases across the country, and that hospital and intensive care capacity remains stable, the effective reproduction number and percent positivity have “have increased slightly over the past week.”

The government says such an increase was “always expected” with people spending more time indoors due to the weather and with the easing of measures.

Under the latest regulations, existing capacity limits and distancing requirements that were set to be lifted in the coming days, will remain in place for certain indoor venues, such as establishments with dance facilities, including night clubs and reception halls.

“Sadly, it’s spreading mostly from the 20 to 39 year old age group,” he said. “It’s mostly in social settings where we take off our mask, where we have close contact as we move indoors in closed spaces, and that’s where most of the transmission is occurring.”

Moore said he doesn’t want the province to take a step back.

“It’s always been my advice to government that if we have to, we’ll pause, but we won’t take step backwards,” he said, adding that he is committed to keeping schools open. He did however keep the option open for regional intervention in case infection rates go high too quickly.

The province says that as of Nov. 10, the majority of reported cases were among the fully vaccinated, counting for 232 cases out of 454. But the vaccinated represent a much larger group of the population, with 85 percent of Ontarians having received at least two doses.

A decline in vaccine effectiveness is another factor that could push the number of cases higher. Rochelle Walensky, director of the U.S. Centers for Disease Control and Prevention,  said in August that vaccines continue to work “exceptionally well” for preventing illness and death, but “what they can’t do anymore is prevent transmission.”

Ontario is recommending a third dose for vulnerable populations and health-care workers.

A study published in October in the New England Journal of Medicine says the effectiveness of the Pfizer vaccine against infection declines to 20 percent between five and seven months after the second dose.