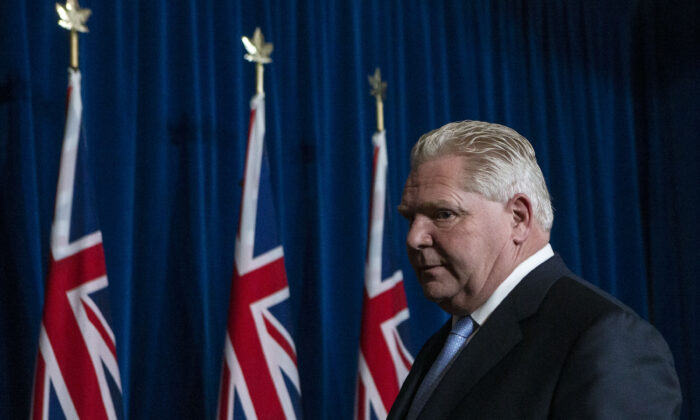 Ontario Lifts State of Emergency Declared Due to Protests

Ford’s office said in a statement on Feb. 23 that the “emergency tools” provided to law enforcement would still remain in place for now, “as police continue to address ongoing activity on the ground.”

“We remain grateful to all front-line officers and first responders that contributed to peacefully resolving the situation in Ottawa, Windsor and in other parts of the province,” the statement said.

The protest soon expanded into a national movement, with supporters joining in to call for an end to all COVID-19 mandates and restrictions. In Ontario, protestors set up a blockade at the Canada-U.S. border crossing in Windsor, among other demonstrations.

Ford pledged at the time to enact orders that would fine people up to $100,000 for blocking critical infrastructure and authorize the removal of licences if people didn’t comply.

He has said that he intends to make permanent some of the temporary measures he enacted to end the blockades.

But for now, Ford’s office said it’s revoking the state of emergency, which means the provincial government can no longer enact new orders, though existing orders—including those that give the police additional power to fine people or revoke licences—can remain for at least 14 days after they were enacted, a spokesperson for Ford said.

The government will need to decide by Feb. 26 whether to extend the police powers.

Ford’s office said it was moving to end the emergency declaration in alignment with the federal government.

On Feb. 23, Prime Minister Justin Trudeau said he was revoking the use of the Emergencies Act because the protests in Ottawa and at border crossings have calmed down.

Trudeau invoked the Act on Feb. 14, giving sweeping additional powers to the police to oust the protesters encamped in Ottawa’s downtown core for three weeks, and quash other protests held in solidarity with those at the nation’s capital.

The Ottawa demonstration had largely been cleared as of Feb. 21, while blockades at border crossings have also ended.

The mayor of Windsor also announced the lifting of its state of emergency on Feb. 24, which was previously declared due to protests blocking the Ambassador Bridge border crossing.

“Today, after consultation with Windsor Police and City Administration, I am lifting the declared State of Emergency related to the illegal occupation of the Ambassador Bridge and the associated disruption along Huron Church Road,” Mayor Drew Dilkens said in a statement.

“The immediate threat has been cleared and we have experienced about a week of cross border trade, unimpeded.”

Dilkens said the city has secured an injunction from the Ontario Superior Court to further provide law enforcement with the tools to protect the road which is vital for cross-border trade.

Dilkens noted that the Windsor government in the coming weeks will make a formal request to the provincial and federal governments to provide financial support to share all the costs associated with clearing the blockade and securing Huron Church Road.