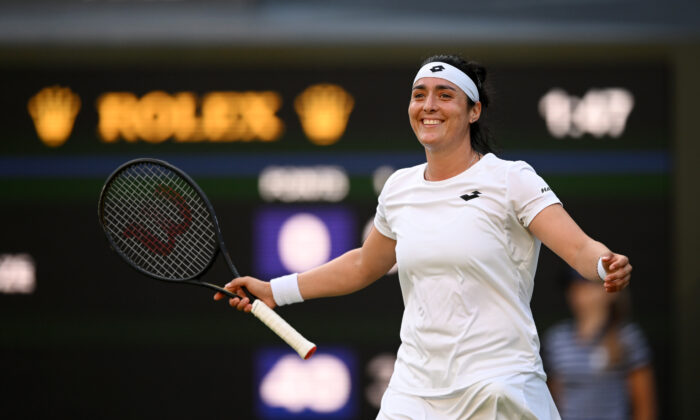 Ons Jabeur of Tunisia celebrates after winning match point against Marie Bouzkova of Czech Republic during their Women's Singles Quarter Final match on day nine of The Championships Wimbledon 2022 at All England Lawn Tennis and Croquet Club in London on July 5, 2022. (Shaun Botterill/Getty Images)
Tennis

Third seed Ons Jabeur of Tunisia dropped the first set before storming back Tuesday to defeat Czech opponent Marie Bouzkova 3–6, 6–1, 6–1 in the Wimbledon quarterfinals in London.

Jabeur not only clinched her first Grand Slam semifinal appearance but also became the first Arab or North African player—male or female—to reach the semifinals of a Grand Slam event.

The world No. 2 is the highest seed left standing in the women’s draw. In the semis, she will face Tatjana Maria of Germany.

“I was hoping that I could get to this stage for a long time already,” Jabeur told reporters. “I was talking a little bit to (former ATP player from Morocco) Hicham Arazi, and he told me, ‘Arabs always lose in the quarterfinals and we are sick of it. Please break this.’ I was, like, ‘I’ll try, my friend.'”

“I know it wasn’t easy playing Marie,” Jabeur said. “She gets all the balls and doesn’t make, to win a point, easy for me. I’m glad I stepped in with my game. I was more aggressive in the second set, and especially tactically I was playing some angles that she didn’t like much.”

Jabeur has yet to lose on grass this season. She won the WTA German Open in Berlin last month and played alongside Serena Williams in the doubles draw of the Eastbourne International, winning two matches before Jabeur had to withdraw while nursing a knee injury.

“It was a really tough match,” Maria said. “It’s always tough to play against a German girl. I didn’t know her really well. We never even practiced together. So it was something completely new.”

Maria, ranked No. 103 in the world, saved six of nine break points and charged back from down 4–2 in the third set. She won three games to take a 5–4 lead, and after Niemeier tied it 5–5, Maria was able to save a break point during the 11th game and grab the win that put her ahead for good.

“When you are outside on the court sometimes it’s really hard to change your tactics, and I had to change my tactics a little bit,” Maria said. “I’m happy that I could do it. I mean, even that I was 4–2 down in the third set, I kept going and I kept fighting. That’s what I did.”

In Wednesday’s other quarterfinals, Australia’s Ajla Tomljanovic will battle 17th seed Elena Rybakina of Kazakhstan and 16th seed Simona Halep of Romania will square off against 20th seed Amanda Anisimova of the United States.