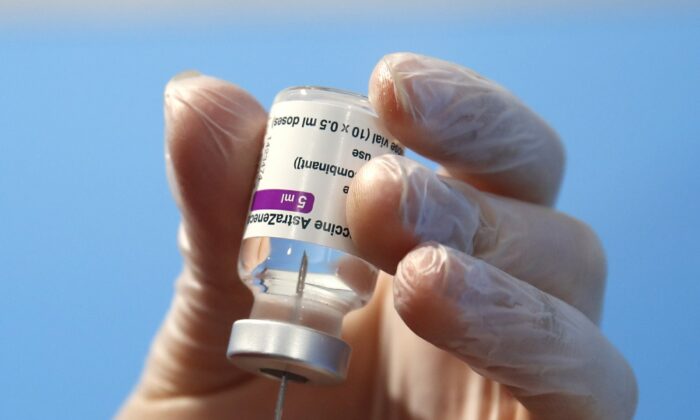 A health worker prepares a dose of the AstraZeneca vaccine to be administered in Fiumicino, near Rome's international airport on Feb. 11, 2021. (Alessandra Tarantino/AP Photo)
US News

About one-third of U.S. military troops have turned down the vaccine for the CCP virus, or the novel coronavirus, said the Pentagon on Wednesday.

Maj. Gen. Jeff Taliaferro, a top official in the Joint Chiefs of Staff, said the military has a two-thirds acceptance rate for the CCP (Chinese Communist Party) virus vaccine.

“Our initial look—and this is of course very early data—is acceptance rates are somewhere in the two-thirds territory,” Taliaferro said in a hearing. “And of course, it varies by different groups.”

Specifically, of about 916,000 doses administered to Department of Defense (DOD) personnel, 359,000 have received at least one dose, while 147,000 are fully vaccinated, said Bob Salesses, who is acting defense secretary for homeland defense and global security.

Salesses told the hearing that “it’ll probably be sometime in late July, August” before the DOD vaccinates its civilian, military, and contractor workforce.

“With new variants popping up across the globe, I’m not sure we can wait two years” for the full Food and Drug Administration (FDA) approval, Rep. Mike Rogers (R-Ala.) said in the hearing. “It’s critical for our national security that every service member, as well as DOD civilian personnel and contractors, receive vaccines as soon as possible.”

Previously, the DOD did not specify how many soldiers were declining the shot.

A spokesman for the agency, John Kirby told Politico and other news outlets on Wednesday that the DOD doesn’t have a system in place to track vaccinations among troops. He dispelled the idea that the Pentagon is withholding information from news outlets and the public.

“Nobody is hiding data,” Kirby said. “We don’t have a system in place across the services to specifically track data with respect to those individuals who for whatever reason are declining.”

Both the Pfizer and Moderna vaccines for the CCP virus are under emergency-use authorization by the FDA. It means the agency has not fully cleared their usage.

The Epoch Times has reached out to the Pentagon for comment.