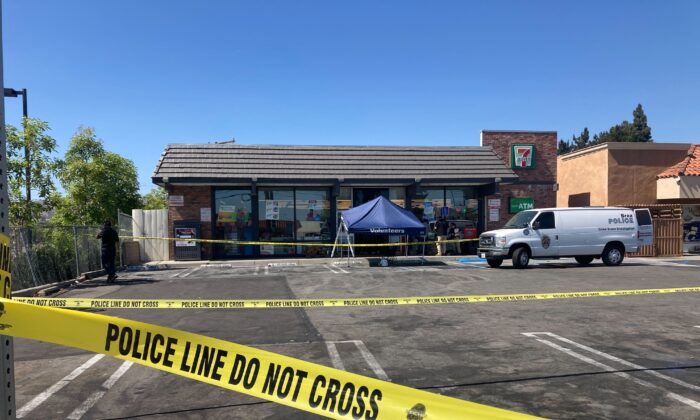 Police crime scene tape closes off a parking area following a shooting at a 7 Eleven store in Brea, Calif., on July 11, 2022. (Eugene Garcia/AP Photo)
US

1 in 5 Californians Have Been Sexually or Physically Assaulted in Past Year: University Study

Violence in California reached “epidemic proportions” during the pandemic, although most victims didn’t report it, according to a new study from the University of San Diego.

The 2022 California Study on Violence Experiences Across the Lifespan (CalVEX) traced rising violence in the Golden State to growing economic insecurity, unemployment, and social inequality.

According to the 33-page survey report, the CalVEX study is the nation’s only statewide assessment of physical and sexual violence, providing investigators with a “unique opportunity” to understand and hopefully reduce violent crimes.

It said the need for more study “cannot be understated,” given the report’s findings that 1 in 5 Californians (18 percent) experienced physical or sexual violence within the past year.

“Current violence prevention efforts are clearly woefully inadequate and often ignore the gendered nature of violence, its intersections with other socioeconomic vulnerabilities, and its disproportionate effects on marginalized populations.”

In March, investigators interviewed 2,285 adults 18 years or older—male and female, transgender, and gay—using data from annual surveys in 2020 and 2021.

The 2022 study found that 1 in 12 (8 percent) of participants experienced physical violence within the past year and that males (11 percent) were more likely than females (5 percent) to report violent crimes.

One in 50 participants reported violence involving a knife, and 1 in 100 said the perpetrator used a gun.

“Men most often reported a stranger as the perpetrator of weapon-related violence, women reported a partner,” the study found.

The study found that one in seven adults (15 percent) in California experienced sexual violence, both physical and verbal, within the past year ending in March 2021.

Victimization from physical violence also increased during the pandemic, to 8 percent this year from 7 percent in 2021 and 4 percent in 2020. Most victims (93 percent females, and 87 males) never reported it, the study found.

Economic insecurity has also played a significant role in the rising tide of violence and “early-stage efforts to support economic recovery under the pandemic have proven inadequate for those already on the economic margins.”

“They ultimately may have contributed to a larger economic downturn as the pandemic continues with new variants and outbreaks,” the report states.

However, since most victims never report violent crimes to authorities, this suggests that law enforcement responses may not help address violence.

The study concludes that health and social welfare services may better serve victims and prevent violent crimes “given the vulnerabilities faced by victims and that most perpetrators are victims as well.”

“Findings have important implications for state programs and policies,” it states.

“Further disconcerting is that this violence has increased under the pandemic; we find significant increases from 2020 to 2022 in terms of both past year physical violence and past year sexual violence,” according to the report.

These findings from the statewide report only confirm that Californians experienced epidemic levels of violence during the pandemic, the study concludes, and that new policies and programs would address the rising trend.