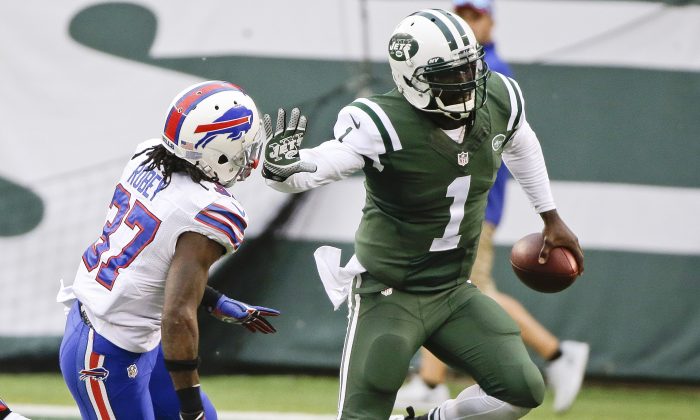 On the Ball: Jets—Three Keys to Beating the Bills

It might have been the ugliest game of Geno Smith’s already failing NFL career.

Back in Week 8 against Buffalo, the second-year quarterback was pulled after just eight ill-begotten pass attempts. Let’s review them: Three went into the hands of the Bills’ defense, two went to no one, and the two others were actually competed to Jets receivers—for five yards.

I watched it all unfold in the press box, along with numerous other media members who were just as dumbfounded as me.

We all had the question: Would Rex Ryan finally bench Geno?

Geno was already the lowest-rated passer around and he had been the year before too, but never had he been this bad. Ryan finally had no choice.

So in went Vick as the new starter, and two games later the Jets finally won. Should Rex Ryan’s crew make a run here, his inserting of Vick will surely be the turning point. First they have to get past Buffalo—should they even play due to the elements. Assuming the game is still on, here’s what they need to win:

1. A healthy Vick needs to continue to perform.

Vick didn’t exactly light up the world in his relief performance against the Bills three and a half weeks ago. It was still an upgrade from Geno, though.

He was better against the Chiefs the next time out, going 21/28 for 196 yards and a TD—and no interceptions—in the 24–10 loss. The next week against Pittsburgh, he was 10/18 passing for 132 yards, 2 TD, and no interceptions again in the all-important win over the Steelers. (Trust me, we were all dumbfounded at that, too.)

Vick has also taken a number of hits this year, and though he’s the most prolific rushing quarterback in NFL history, he can also get injured that way. That’s how his time with the Eagles ended last season—with him hobbling off the field after injuring his hamstring. The Jets need a healthy Vick at all costs.

2. A decent performance by the secondary.

The Bills don’t have a great quarterback situation either.

Journeyman quarterback Kyle Orton is their new guy at quarterback since they demoted E.J. Manuel after Week 4. Orton, a 10-year veteran, is on his fifth different team and has performed well so far: 1,508 yards passing, 10 TD, 3 Int, while completing 64 percent of his passes through six games. That’s a QB rating of 93.5.

He’s never really been able to sustain whatever success he’s had, though, and six games this year isn’t enough to say he’s turned the corner.

Maybe with Michael Vick directing a more efficient offense behind, the defense will perform better.

I’m hoping the Jets spent a good amount of their bye week practicing more plays that center on giving the ball to Harvin in open space—especially end-arounds. The speedster can be a great offensive weapon, but only if you use him, of course.

So far the Jets have used him somewhat, but it could still be more. Through three games with Gang Green, Harvin has 17 catches for 174 yards, while running the ball 11 times for 69 yards, but he has yet to find the end zone. A score from Harvin would go a long way in beating the Bills on Sunday.