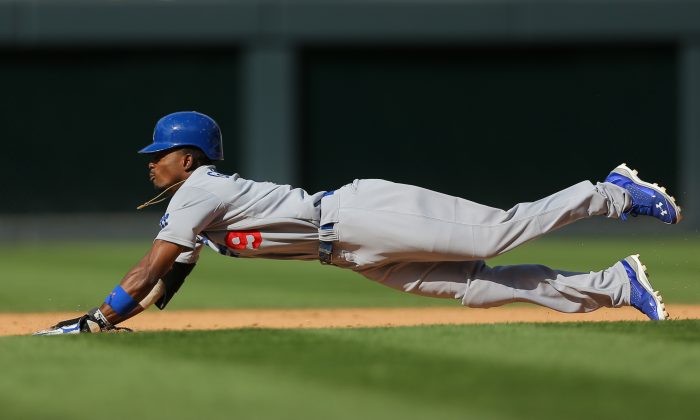 Dee Gordon of the Los Angeles Dodgers, in this July 5, 2014 photo, has been the team's offensive catalyst hitting out of the leadoff spot. (Justin Edmonds/Getty Images)
News

On the Ball: Baseball Power Rankings

There’s still two and a half weeks left in the season and though we all know the Angels and Orioles are near shoo-ins to win their respective divisions, the AL Central is still up for grabs. Meanwhile in the National League, the Brewers have quickly fallen out of the NL Central lead and are already out of the two wild card spots. Can they recover or will Pittsburgh make it two straight playoff appearances? In any case, here are the ten best teams in baseball:

10. St. Louis Cardinals (80–67): Yadier Molina, the heart and soul of the Cardinals, has yet to regain his offensive form after returning from thumb surgery on August 29. In 13 games since his return the six-time All-Star is hitting just .234. Last week: 10

9. San Francisco Giants (81–65): The Giants were hamstrung for seven years with Barry Zito’s $126 million deal, yet still won two World Series titles—despite the wasted money. When the contract finally expired last offseason they promptly made the same mistake again and signed the declining Tim Lincecum to a two-year $35 million deal. Lincecum’s now been demoted to the bullpen with a 4.67 ERA. Last week: 9

8. Kansas City Royals (80–65): The Royals are still in the driver’s seat for their first playoff appearance since 1985. A big reason why is the bullpen. Seventh-inning reliever Kelvin Herrera has a 1.30 ERA in 62.3 innings, eighth-inning set-up man Wade Davis has a 0.60 ERA in 64.3 innings, while closer Greg Holland has 42 saves while sporting a 1.60 ERA. Last week: 8

7. Detroit Tigers (80–66): With 22 home runs, 101 RBIs, and a .310 batting average it’s actually been a bit of down year for reigning two-time MVP Miguel Cabrera—but he’s heating up. The 31-year-old is hitting .450 with 5 home runs in September as the Tigers are in a heated race for a for their fourth straight division crown. Last week: 7

6. Seattle Mariners (79–66): The Mariners are in contention for a wild card spot but to get it, they’re going to have to earn it. Seattle still has two series with the 90-win Angels and one with the 81-win A’s left in the season’s final weeks. Last week: 6

5. Washington Nationals (83–62): The Nationals’ starting rotation is so good that star pitcher Stephen Strasburg is actually fourth in ERA (3.46) among the five starters. Still his 223 strikeouts are tops in the National League. Last week: 3

2. Baltimore Orioles (86–59): Lost in Nelson Cruz’s epic season (39 home runs) is the forgettable season Chris Davis is having. In case you forgot, Davis had league-highs of 53 home runs and 138 RBIs last season while hitting .286. This year the only thing he leads in is strikeouts (173) while hitting an abysmal .196. Last week: 2

1. Los Angeles Angels (91–55): The Angels are more than worthy of the top spot. Los Angeles has the best record in baseball, while sporting the second-best run-differential in the majors, and haven’t lost since September 3rd. During the current eight-game win streak, the team has averaged 8.8 runs a game. Last week: 1