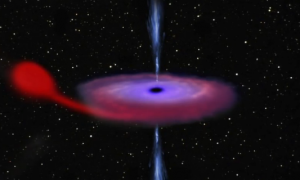 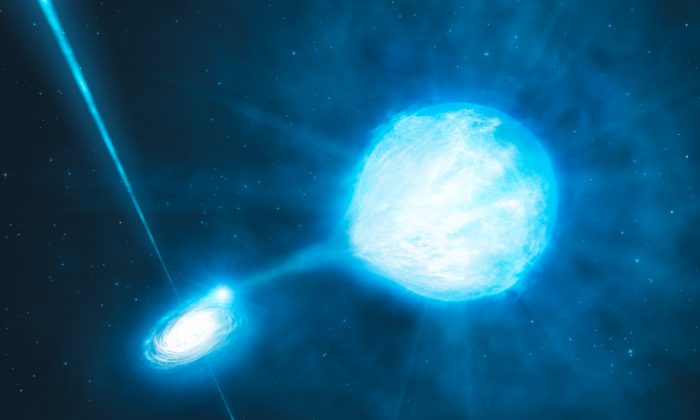 An artist’s rendering of NGC 300 X-1 as it was envisioned shortly after its discovery—an unusually massive black hole (left) with a Wolf-Rayet star (right). Binder and her colleagues recently showed that the Wolf-Rayet star may not be the black hole’s true companion.(ESO/L. Calçada/M. Kornmesser)
Science

New data from a distant galaxy suggests a puzzling stellar phenomenon may not be what astronomers have long believed.

Researchers looked at a binary star system called NGC 300 X-1, nestled within a far-flung galaxy in the constellation Sculptor. Beginning in 2007, scientists reported that this system of two stars appeared to be a rare pairing of a massive black hole and a large, unstable star—but struggled to explain how these two mighty bodies with violent histories could remain so intimately joined.

The new study, published in the Monthly Notices of the Royal Astronomical Society, shows they may not be paired at all.

“I thought this would be a quick follow-up project on this binary system with new observations,” says Breanna Binder, an astronomer at the University of Washington. “But what we found was a lot more interesting than I thought.”

The system has puzzled astronomers since its discovery. The black hole was unusually large. Most black holes—created after massive stars explode as a supernova—are about five to 10 times more massive than the sun, Binder says.

But the black hole in NGC 300 X-1 was 20 to 30 times more massive than the sun. In addition, other groups reported that the black hole’s orbiting companion was an enormous, unstable star in the Wolf-Rayet phase of its life.

Only the largest stars go through this brief phase before they explode as supernovae. The pairing of two rare and violent stellar phenomena defied explanation.

“These really massive stars that form black holes and Wolf-Rayet stars are only one out of every 3 million stars,” Binder says. “So they’re incredibly rare to begin with, and then to see two of them together as a binary is even more rare.”

Were They Entirely Wrong?

All previous observations of this “rare and exotic” system came from ground-based telescopes. But last year Binder obtained the first space-based views of NGC 300 X-1 from the Hubble Space Telescope and the Chandra X-ray Observatory. Binder, enlisted two astronomy undergraduates, Jacob Gross and Daniel Simons, to help her analyze these more detailed datasets. She expected them to confirm ground-based observations. Instead, they found multiple inconsistencies.

“We basically showed that past groups could’ve gotten entirely wrong what this system is,” she says. Gross and Simons first discovered a problem with the black hole: previous researchers may have inadvertently overestimated its mass. “It might be one of these smaller and more normal black holes.”

In addition, the researchers realized that the Wolf-Rayet star may not be the black hole’s true companion. Using clearer, space-based observations of NGC 300 X-1, they discovered another star that may instead be orbiting the black hole. This alternative star is less massive and resembles what the sun will look like in its later life.

Don’t Write the Eulogy Yet

The scientists didn’t have enough observations from Chandra and Hubble to determine the black hole’s true mass, or identify which star is its companion. But if the black hole is smaller and paired with the alternative star, that would make this binary system much more ordinary.

That may come as a relief to astronomers who could not explain why this system existed. The massive black hole was once a star that swelled and exploded as a supernova, and astronomers could not understand why this supernova hadn’t expelled the immense and unstable Wolf-Rayet star. If the Wolf-Rayet star is not the black hole’s true companion, then there is no need for head-scratching.

“People had to come up with a lot of new ideas about stellar evolution—especially for massive stars—in order to explain why this massive binary existed,” Binder says. “But if this actually turns out to be a more run-of-the-mill, commonplace system, we may have had a better idea of stellar evolution and binary stars than we thought.”

The findings come on the heels of another new study that casts doubt on the composition of IC 10 X-1, the only other reported binary system containing a massive black hole and a Wolf-Rayet star. But, Binder stresses, astronomers must verify all of these findings—including her team’s—before writing the eulogy for this rare and perplexing type of binary system.

“We need to follow up on this system, get more X-ray coverage and measure the velocity of these stars,” she says. She is requesting time on another NASA observatory to do just that.