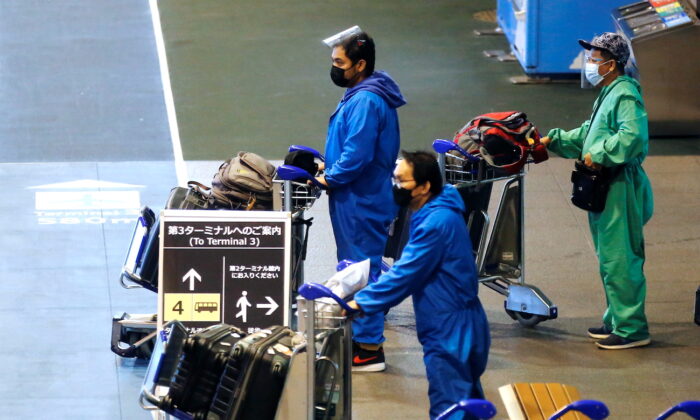 Men wearing protective suits make their way at a bus stop at Narita international airport on the first day of closed borders to prevent the spread of the new Omicron variant amid the pandemic in Narita, east of Tokyo, Japan, on Nov. 30, 2021. (Kim Kyung-hoon/Reuters)
Viewpoints

Omicron Unleashes New Wave of Hysteria, With Rule by Decree in Force

Just over a year ago, President-elect Joe Biden promised a “very dark winter” ahead in the face of COVID-19, and told the nation he would “spare no effort to turn this pandemic around once we’re sworn in on Jan. 20. It’s time to put aside the partisanship and the rhetoric designed to demonize one another.”

Now here we are, 13 months later, in the run-up to the shortest day of the year and the start of a third season of “pandemic” panic: How’s that working out for you, America?

After a year of nothing to show for a fruitless battle against a bug that can’t be defeated, Biden has rolled out another more-of-the-same “plan” involving more vaccination mandates on private companies (even though the federal courts are shooting such mandates down on a regular basis), jabbing healthy, crying children, demanding more booster shots of vaccines already proven to not work as initially advertised, and reinstituting travel bans at the drop of a letter of the Greek alphabet. Bonus points: Recent tests indicate that the Pfizer and AstraZeneca vaccines are nearly useless against the latest new variant, Omicron.

Speaking of which—thanks to an increasingly irresponsible media—Omicron has now terrified the civilized world, setting off cries for more lockdowns and general harum-scarum, even though the international “death toll” of this bug is so far a grand total of seven, with all the deaths reported in the United Kingdom.

But that hasn’t stopped the hysterical British prime minister, Boris Johnson, from instantly decreeing “Plan B,” which includes work-from-home orders, face-mask mandates, and proof of vaccination in large public venues. An even more oppressive “Plan C” is just around the corner. That Johnson is in the middle of his own scandal involving himself and his aides flouting and mocking the very rules they’re imposing on ordinary Britons is entirely coincidental.

COVID hysteria is even worse in places such as Australia, where anyone who runs afoul of the former penal colony’s current ruling class gets sent to concentration camps. A recent escape from one of these relics of the good old days of “transportation” by three Aboriginal youths who didn’t even have COVID set of a breathless manhunt for these dangerous criminals—all because they were “close contacts” of someone with a “case.”

Hong Kong has just decreed that all travelers from the United States—who must be fully vaccinated Hong Kong residents in the first place—must first spend seven days at a quarantine camp followed by two weeks in hotel quarantine. This is all because of the dreaded Omicron.

Meanwhile, hospitals are laying off the sensible staffers—hailed as heroes just a few months ago—who refuse to take part in history’s largest unsupervised medical experiment, thus necessitating the presence of soldiers from the National Guard in U.S. hospitals to take up the slack in four states, including Indiana, Maine, New Hampshire, and New York.

The staffing shortages are, of course, a direct result of the mandates; further, in an echo of the supply chain problems currently plaguing U.S. businesses, they’re also slowing down the processing and discharge of patients from hospitals, thus contributing to the hospital bed shortage. A ruling on Dec. 13 by an increasingly erratic Supreme Court that refused to block a New York State requirement that all health care workers be vaccinated—even if they claim a religious exemption—will only add to the chaos.

The militarization of the health care system is just the latest example of what has become the nationalization of medicine. Most doctors must now follow political “guidelines” in dealing with patients and, increasingly, unvaccinated patients are being refused service—a violation of physicians’ professional oaths. The long struggle over socialized medicine is now essentially over. Going forward, expect the slogan “My body, my choice” and the Health Insurance Portability and Accountability Act to be relegated to the ash heap of history—all in the name of “public safety.”

On the education front, many schools are still adamantly refusing to return to normal, making it clear that the teachers’ unions are more about unions than teaching. With the right-on-time appearance of Omicron, more and more school districts are suddenly reclosing, even though the impact on health has been negligible.

Once again, we see the ripple effect at work.

A recent industry report reads: “After a big drop in closures earlier this fall, more schools are now shutting down as colder weather spreads and COVID rates climb in various parts of the country. … COVID is continuing to shut down classrooms, schools and entire districts in northern states that experienced less severe outbreaks of the delta variant … as many of this fall’s closures have been caused by shortages of teachers, bus drivers, and other staff as have been caused by COVID outbreaks among students.”

But the main takeaway is this: Teachers just don’t want to teach, but instead view their profession as a state-sponsored sinecure.

On the broad front, rule-by-decree—first popularized by Barack Obama with his infamous “pen and phone” comment, has replaced rule-of-law. Nowhere in the Constitution does the president have legislative power (or the Supreme Court, for that matter) but as the turn-of-the-century Tammany Hall fixer George Washington Plunkitt famously said, “What’s the Constitution among friends?” Far easier to issue “executive orders,” regardless of their constitutionality, and that’s exactly what Biden has been doing since the start of his presidency.

The Democrats constantly mutter—and fundraise—about saving “our democracy,” by which of course they mean their democracy. This apparently consists of totalitarianism via the smallest possible majorities in Congress, a unified, pliant press corps, and vast infusions of cash from sources as disparate as the People’s Republic of China and the pharmaceutical industry—both of which have profited politically and financially from the current crisis.

“Seventy-two senators and 302 members of the House of Representatives cashed a check from the pharmaceutical industry ahead of the 2020 election—representing more than two-thirds of Congress, according to a new STAT analysis of records for the full election cycle,” reads a recent watchdog report. “Pfizer’s political action committee alone contributed to 228 lawmakers. Overall, the sector donated $14 million … it remains routine for the elected officials who regulate the health care industry to accept six-figure sums.”

Finally, on the demonization front, things have only gotten worse—with Biden himself leading the charge against the unvaccinated. In September, he divisively charged that unvaccinated people are harming the economic recovery, making people sick and causing others to die.

“We’ve been patient, but our patience is wearing thin,” he said.

“Look, we’re the United States of America,” Biden concluded. Or at least we used to be.