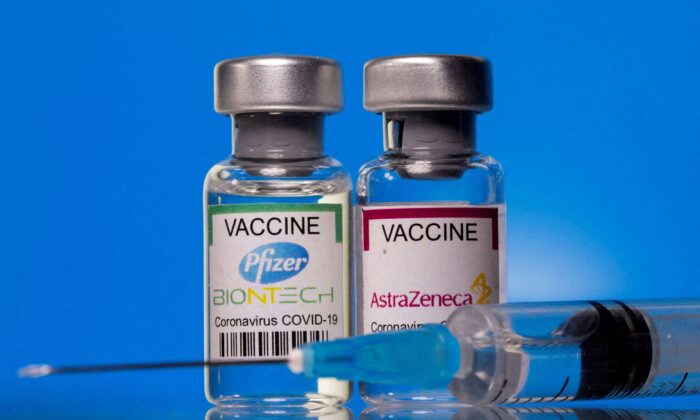 A Danish study of nearly 12,000 households has discovered that Omicron spreads faster than Delta among those who are fully vaccinated, and even faster between those who have received booster shots, indicating the variant’s ability to better dodge vaccine-induced immunity. Unvaccinated individuals were about as susceptible to infection as vaccinated. Those with a booster were less susceptible.

The Omicron variant was found to evade the immunity of vaccinated individuals much more easily compared to Delta, while among the unvaccinated, it spread only somewhat faster than Delta, according to the study conducted by researchers at the University of Copenhagen, Statistics Denmark, and Statens Serum Institut.

Transmissibility—the likelihood that one infects another person—was about the same for both variants, the study found. Unvaccinated were about 40 percent more likely to transmit the virus than fully vaccinated and about twice as likely than the boosted.

There were altogether 11,937 households involved in the study, out of which 2,225 already had Omicron. After one to 7 days, the team followed up with the households and found 6,397 secondary infections. The SAR was found to be 31 percent with the Omicron, and 21 percent with the Delta variant.

Omicron has spread to 90 countries worldwide and has become the dominant variant in the United States. However, the strain has proven to cause mild symptoms compared to earlier variants like Delta, and results in fewer hospitalizations.

“The Omicron VOC (variant of concern) has been reported to be three to six times as infectious as previous variants, with a short doubling time, including early estimates from countries with a high vaccination coverage indicating doubling times of 1.8 days (UK), 1.6 days (Denmark), 2.4 days (Scotland) and 2.0 days (United States),” from the study.

The researchers endorsed “non-pharmaceutical interventions that were used to control the previous variants of SARS-CoV-2,” saying those are “also likely to be effective against the Omicron VOC.”

Seventy-eight percent of Danish citizens are fully vaccinated with two doses, while almost half have received a booster shot. More than 80 percent have received Pfizer-BioNTech’s vaccine.

The vaccination effectiveness with Pfizer-Biotech for preventing infection with the Omicron variant is only 35 percent, the study found. “The advantage of the Omicron VOC seems to be a combination of high transmissibility and increased immune evading abilities,” it said.

“We therefore suggest that adapted or improved vaccines may be necessary to mitigate the spread of the Omicron VOC.”

The Danish team added that more studies are required to understand the latest COVID-19 variant, as they concluded, “Our results confirm that booster vaccination has the potential to reduce Omicron VOC transmission in households, although vaccination as a strategy for epidemic control is increasingly challenged by the immune evasiveness of the Omicron VOC.”

A preprint of the study was published on Dec. 27, and it has not yet been peer-reviewed.

Update: The article was edited for clarity and updated with additional information from the study.