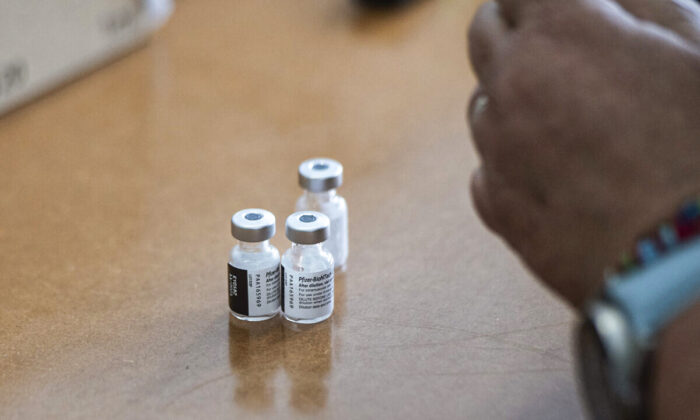 The Omicron coronavirus variant is able to evade the protection gained from mRNA COVID-19 vaccines such as those made by Pfizer and Moderna, a South African study has found.

A study published on Jan. 18 in The Lancet examined some of the first documented breakthrough cases of the highly transmissible Omicron strain, which emerged in South Africa in late October 2021.

Between late November 2021 and early December 2021, a group of seven Germans who had received three vaccine doses, including at least two doses of an mRNA vaccine, visited Cape Town, South Africa, and subsequently developed symptomatic COVID-19. None of the individuals had reported a history of COVID-19 infection. COVID-19 is the disease caused by the CCP (Chinese Communist Party) virus.

The cases among the group were the first documented breakthrough infections with the Omicron variant in fully vaccinated individuals after receipt of booster vaccine doses, according to the study.

“The presence of this group from Germany presented a unique opportunity to study Omicron breakthrough infections in individuals with mRNA vaccine boosters,” the study reads.

The authors noted that their findings are limited to “a low number of individuals in relatively young and otherwise healthy individuals.”

“This case series adds further evidence that, as predicted, omicron is able to evade immunity induced by mRNA vaccines in vivo,” the study reads.

The researchers also said their findings underscore the importance of adopting measures to curb the spread of the virus, such as social distancing and mask-wearing.

COVID-19 vaccines initially were trumpeted as a way to prevent people from contracting the CCP virus, and officials had hoped that getting enough people vaccinated would lead to herd immunity, a situation in which the virus would be greatly diminished or even eliminated.

Those hopes haven’t panned out, largely because the vaccines proved increasingly ineffective at preventing infection, even before the emergence of the Omicron variant.

World Health Organization (WHO) officials said on Jan. 18 that new variants of the novel coronavirus are likely to emerge, given the current high levels of transmission.

Maria Van Kerkhove, the WHO’s technical lead officer on COVID-19, said at a briefing in Geneva, that the Omicron variant is unlikely to be the last strain, as the virus is still “circulating at a very intense level” worldwide.

“We’re hearing a lot of people suggest that Omicron is the last variant, that it’s over after this. And that is not the case,” she said.

Van Kerkhove said countries must keep up measures to curb transmission of the virus in order to reduce severe disease and deaths, such as wearing masks, social distancing, and avoiding crowded areas.

“We don’t want to get into a whack-a-mole for every variant, where you have to make a booster against a particular variant,” Fauci said. “You’ll be chasing it forever.”