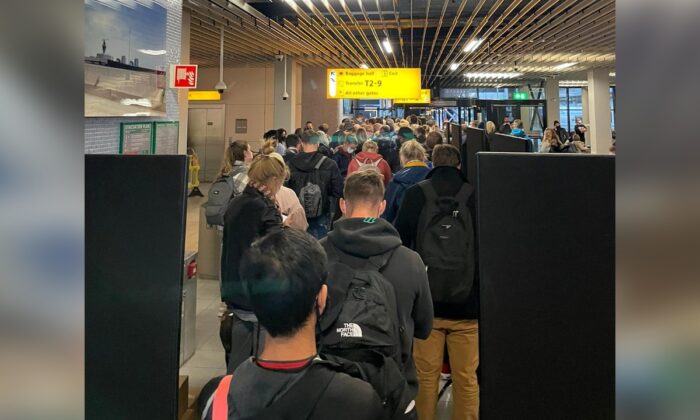 Passengers traveling from South Africa line up to be tested for COVID-19 after being held on the tarmac at Schiphol Airport, Netherlands, on Nov. 25, 2021. (Social media via Reuters)
WORLD

Health officials announced on Nov. 28 that the CCP (Chinese Communist Party) virus Omicron strain, which the World Health Organization labeled a “variant of concern,” has been found in several European countries over the weekend.

Last week and during the weekend, WHO and other officials sounded the alarm by saying that the Omicron variant could be highly infectious and may reinfect people who already contracted COVID-19 previously, although WHO officials criticized the EU, the United States, and the UK for imposing travel restrictions last week. Also unclear is how the variant affects vaccinated people.

Meanwhile, top South African doctor Angelique Coetzee told news outlets that the variant causes unusual yet mild symptoms in the patients she has treated so far, saying they were “so different and so mild from those I had treated before.”

Nonetheless, the Netherlands’ National Institute for Public Health and the Environment said on Nov. 28 that the variant was found during the sequencing of 61 positive CCP virus results. The agency said that the sequencing “had not been entirely completed” and added that it was “possible that the new variant will be found in more test samples.”

Also on Nov. 28, Italian officials confirmed the first case of the variant from a traveler who came from Mozambique, located in southern Africa, according to a statement. Officials didn’t say when the passenger arrived or reveal their nationality.

Danish officials confirmed two cases of the new variant on Nov. 28, according to the Danish State Serum Institute. Two passengers arriving via plane from South Africa tested positive for the Omicron strain, they told CNN, adding that both passengers are in quarantine.

The U.S. Centers for Disease Control and Prevention (CDC) on Nov. 27 said that no cases of Omicron had been detected so far in the United States, although top federal health officials last week said it’s not clear.

Dr. Anthony Fauci, a top White House adviser and the face of the federal government’s COVID-19 response, told the “Today” show on Nov. 27 that he “would not be surprised” if the Omicron variant was in the United States already, saying that “when you have a virus like this, it almost invariably is ultimately going to go essentially all over.”

Cases have also been detected in Germany, the Czech Republic, Israel, Austria, and Belgium in recent days, according to officials. The European Union on Nov. 26 announced that it’s restricting travel to Botswana, Eswatini, Lesotho, Mozambique, Namibia, South Africa, and Zimbabwe—while the United States is slated to impose a travel ban on those southern African nations starting Nov. 29.

The UK also confirmed two cases of the variant connected to travel to the southern African region, officials said.

“We will require anyone who enters the UK to take a PCR test by the end of the second day after their arrival and to self-isolate until they have a negative result,” UK Prime Minister Johnson told a news conference on Nov. 27.

The WHO raised eyebrows after naming the variant Omicron, skipping over two letters in the Greek alphabet, including “xi,” as some suggested the agency was attempting to avoid angering Chinese leader Xi Jinping.

“Two letters were skipped—Nu and Xi—because Nu is too easily confounded with ‘new’ and Xi was not used because it is a common surname and [the] WHO best practices for naming new diseases … suggest avoiding ‘causing offence to any cultural, social, national, regional, professional, or ethnic groups,’” the United Nations agency said on Nov. 27. “Mu” is also a common Chinese surname, and it was used by the WHO as a COVID-19 variant that emerged earlier this year.