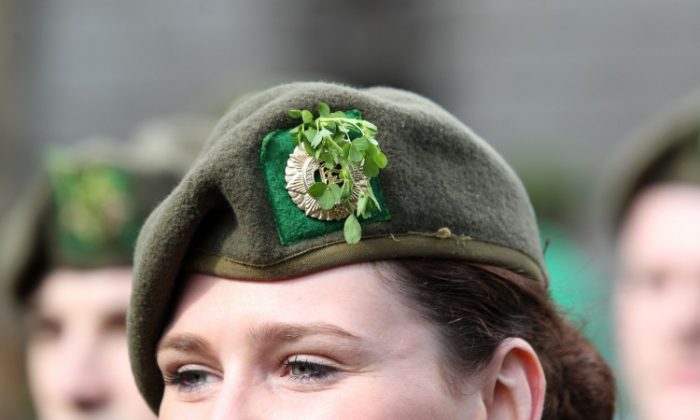 Picture of an Irish female army officer wearing a shamrock in her cap as she marches in the St Patrick's Day festivities in Dublin, Ireland on March 17, 2012. (PETER MUHLY/AFP/Getty Images)
US

The Ombudsman for the Defence Forces, Ms Paulyn Marrinan Quinn S.C., published her office’s 6th annual report on Monday. In her speech at the launch ceremony, she lauded the positive engagement of the defence forces and their representative organisations with her office.

“My Office’s achievements are their achievements, and I commend all of them for their constructive approach and openness to reform,” said Ms Marrinan Quinn.

Her overall assessment of the last year was a very positive one: “It is safe to conclude that the establishment of the Office of Ombudsman for the Defence Forces (ODF) has had a positive impact on administrative and human resource management practices within the Defence Forces,” she said. She also referred to a number of successes during the past year.

The positive impact can easily be measured by the stark increase of complaints that have been handled through the internal redress system of the Defence Forces in that period. Whereas in 2009 only 21 per cent of the complaints by members of the forces had been resolved internally, for 2011, that number had risen to 46 per cent.

“Such change could only happen through the positive engagement of the Chief of Staff, his senior command and staff, members of the Defence Forces, their representative associations; and successive ministers for defence,” she said.

The success of Ms Marrinan Quinn’s work is illustrated by the number and nature of the complaints dealt with by her office – in 2011, they dealt with some 83 cases. The majority of complaints dealt with administration matters concerning the selection procedures for promotion within the military. Only four related to alleged inappropriate behaviour or bullying.

Some 36 per cent of cases handled by the ODF’s Office in its entire history concern matters of management and administration of promotion. Ms Marrinan Quinn stated: “I am very pleased that the issues that my Office has raised in relation to promotion procedures have been taken on board and the Minister for Justice, Equality and Defence and Chief of Staff confirmed that the new promotion procedures, which I hope will be more transparent and consistent, have been agreed and are in place.”

However, she also stressed that the impact of her Office also depends on the legal framework supporting it, which therefore should evolve to meet ever-changing demands and challenges.

“The legislation underpinning the operation of my Office has proved transformative in terms of providing a clear framework for civilian administrative oversight of the Defence Forces, and has set an internationally-recognised benchmark of best practice for the Office of Military Ombudsman. I advocate that the legislation should remain under review in order to ensure that it continues to be relevant and at the cutting edge.”

The Office of the ODF was established in 2005 in order to provide civilian scrutiny of administrative practices within the defence forces, as well as to provide an independent, impartial and accessible appeal process for members of the forces not satisfied with the internal handling of their grievances.