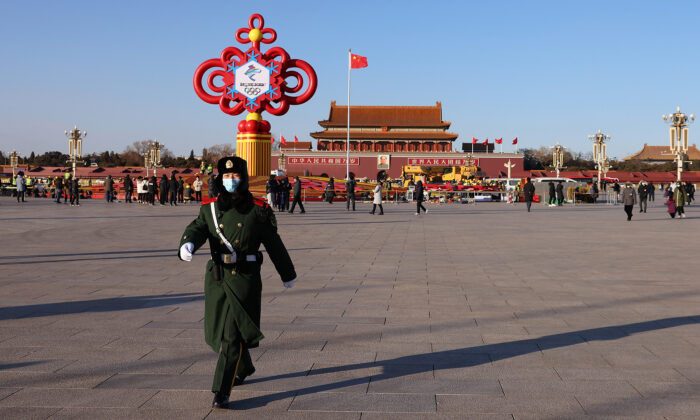 An armed policeman marches through a 17-meter-high flower bed with the theme of "Wonderful Winter Olympics" at Tiananmen Square on Jan. 15, 2022 in Beijing, China. (Lintao Zhang/Getty Images)
China Human Rights

The Beijing Games and the pandemic will make everyone realize that 'we cannot sell our souls,' the coach says
By Peta Evans

Two-time Olympic bronze medalist and current coach of the Latvian men’s luge team Martins Rubenis took the opportunity to express his disdain over the Chinese regime hosting the 2022 Games during an interview with Latvian media hours after his team competed at the Winter Olympics on Feb. 7.

“This is a huge ‘spectacle,’ and for me, as an Olympian, my heart aches watching this,” Rubenis told the Latvian media.

He told of his team turning on the TV in the evening only to see “Tiananmen Square on one of the channels with a picture of Mao and the Olympic rings on the corner.” When they’d first arrived and disembarked from the plane, they were met with “people dressed in white protective suits,” who may have been told the international athletes were “bringing another plague.”

“It felt like we were treated as a plague and that they had to keep a distance from us,” he said. “And it was clear, when we went through, the flowers and the flags of the CCP were flowing and we were shown such a huge political theater on the theme of, ‘you see how good everything is here.'”

The athlete-turned-coach competed in a total of five Winter Olympics. He won Olympic bronze in both the men’s luge singles event at the 2006 Winter Olympics in Turin—which was Latvia’s first Winter Olympics medal as a sovereign state after the collapse of the Soviet Union—and the luge team relay at the 2014 Winter Olympics in Sochi, with Latvia Post honoring the win by issuing a commemorative stamp of Rubenis and his teammates.

He retired as an athlete after the 2014 Winter Olympics and took up the role of team coach and also became a member of the Latvian Olympic Committee. But with the 2022 Beijing Olympics, he said, he was torn over whether to attend or not.

“To these Olympic games, I came with very dual feelings. Until the very last moment, I didn’t know if I would be able to come here at all,” Rubenis told the media.

As a vocal and active advocate for human rights in China, Rubenis once stood as the official ambassador for the Global Human Rights Torch Relay in the lead-up to the 2008 Beijing Olympics. The relay was a worldwide effort to raise awareness of the plight of groups persecuted in China by the Chinese Communist Party (CCP) and to call for a move of the 2008 Games away from China or a boycott. Since then, he’s continued to speak out and was shocked when China was awarded yet a second Olympics, despite its grave human rights record.

“Knowing what my attitude is toward human rights issues here in China, it was absolutely unacceptable for me, as an Olympian, to hear about the International Olympic Committee’s decision to host the second Olympic Games here,” he said. “And if I had been an athlete, I probably wouldn’t have come here. But I came here to help the team.”

Rubenis’s unlikeliness of attending was based not only on his not wanting to support a CCP-hosted Olympics; his previous public statements meant that the CCP most likely would not have granted him a visa to enter anyway.

“I had this feeling, from the very beginning, I thought that there would be a 90 percent chance I would not be granted a visa, and would not be allowed into the country,” he said. “But I think that they made a political move—that it was more ‘silent’ to let me in, rather than leave me behind in Latvia.

Rubenis told the Latvian media that it would be a completely different feeling to be in the Olympics anywhere else in the world.

“A lot of athletes have talked about it here and a lot of trainers have talked about it,” he said. “People who have lived in the western world don’t understand how people can do things like that—as puppets. And well, it’s good that the whole world has the opportunity to see it—see things as they are.”

Rubenis said he understands that most Chinese people have grown up under the CCP’s wing from childhood, and thus he feels great pity for them, “because from their childhood, from the age of 4, when they were released to kindergarten, they have been heavily brainwashed,” he explained. “This brainwashing is seen and felt at every step, and that is why they are afraid of everything they have not asked permission for.”

While “absolutely not afraid” to speak out about his views while still in Beijing and with CCP officials right next to him, Rubenis said to the Latvian broadcasters, “Still, the biggest evil that the CCP is doing is this forced organ harvesting.”

Since 2006, cases of state-sanctioned murder for organs in China have been continuously reported by practitioners of Falun Gong (Falun Dafa), who have been the subject of ongoing persecution by the CCP since 1999 when then-leader of the party Jiang Zemin launched a nationwide eradication campaign in an attempt to stamp out the peaceful practice. A meditation and self-cultivation discipline, Falun Gong’s teachings are based on the core tenets of truthfulness, compassion, and tolerance.

In 2019, the London-based China Tribunal issued a final judgment on the organ pillaging claims after conducting hearings of over 50 fact witnesses, investigators, and experts, concluding that “commission of crimes against humanity against the Falun Gong and Uyghurs has been proved beyond reasonable doubt,” and that forced organ harvesting has been happening on a “significant scale.”

Talking about the CCP’s aggression toward Taiwan, toward Hong Kong, and toward the whole world, he said that, while it may all seem “a little funny” to civilized people, it can’t be ignored “that money does its job.” “And there are so many greedy people who are willing to sell their souls,” he added.

Rubenis stressed that the things currently happening in the world are calling out to every person who values freedom and human rights.

“I think that now is a very special time, and it’s not a question of what our government will do, or what those people who make decisions will do,” he told the media. “I believe that this is a moment where each of us has to deeply look within ourselves and tell whether this is acceptable to us, whether we want to live in such a world, or whether we are putting this aside and walking a humane path.

“I believe that these Olympic Games, and all this situation in the world with the whole COVID boom, will open our eyes a little to the fact that we cannot sell our souls.”

Peta Evans
Follow
Peta Evans is a writer for The Epoch Times. She covers inspiring stories about people, tradition, and human rights.