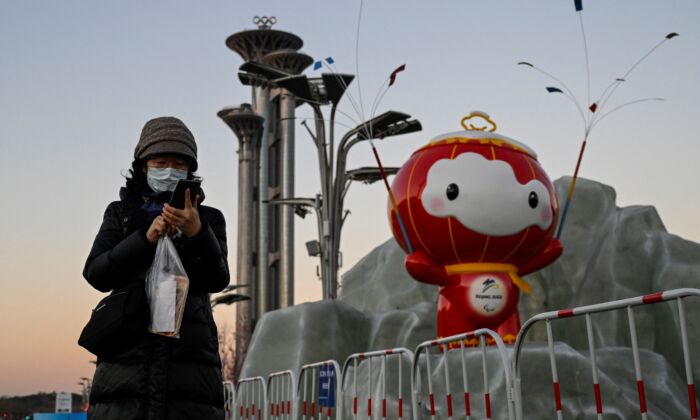 A woman checks her phone in front of an installation of Shuey Rhon Rhon, mascot of the Beijing 2022 Winter Paralympic Games at the Olympic Park in Beijing on Jan. 13, 2022. (Jade Gao/AFP via Getty Images)
Social Control

A former senior U.S. intelligence official warned Olympic athletes to be wary of “multidimensional threats” in the run-up to the 2022 Winter Games in Beijing, including potential digital surveillance.

“Take a clean phone,” suggested Nicholas Eftimiades, a retired senior American intelligence officer in an interview with EpochTV’s “China Insider” program. “Don’t put any passwords in it; don’t log into accounts that need specific passwords through the phone. … Your communications devices, and if you take new laptops, have them cleaned by a professional upon return,” he told athletes.

“Understand that whatever information you put into any phone, the Chinese government can and most probably will collect,” Eftimiades said, warning of both short- and long-term concerns.

“There are actually multiple concerns for athletes visiting China this time; No. 1 is their personal privacy,” Eftimiades said. His message comes as countries, including the United States, encourage athletes to take burner phones, or disposable devices that they don’t intend to keep when they get back home.

China has the first digital authoritarian regime in the world, Eftimiades said, adding that its state surveillance apparatus is “second to none.” “It’s a minor blip to monitor the thousands that are coming into the Olympics when they monitor hundreds of millions on a daily basis.”

Beijing has pledged to provide Olympians internet access beyond the Great Firewall at official venue sites and hotels, the International Olympic Committee confirmed to Voice of America, meaning about 2,700 foreign athletes can use Facebook, Twitter, Google, YouTube, and foreign news websites that are banned in China, during their stay.

Yet cybersecurity fears exist as internet access will likely be monitored, he said.

Recently, U.S. researcher Jonathan Scott found flaws in the Beijing 2022 Olympics app that he says allow the app to snoop on users. The algorithm for the app was developed by iFlytek Co., a blacklisted Chinese tech firm that works closely with China’s Ministry of Public Security and is known for its ties to Beijing’s human rights abuses in China’s far-western Xinjiang region.

The app listens to all audio and detects Beijing-deemed sensitive words before collecting the data and sending it to servers in China for analysis, according to Scott. The Citizen Lab, a research institute at the University of Toronto, also found that the app has the ability to censor 2,442 blacklisted words considered “politically sensitive,” according to its digital forensic analysis on Jan. 18.

“When this was pointed out to the Chinese government in early December, they got no response to those flaws,” Eftimiades said. “When the app was updated in mid-January, it included no corrections.”

“It’s pretty obvious at this point if the Chinese government was at all concerned with the security and the privacy of the athletes, it would have corrected those flaws,” he said.

Yet long-term concerns emerge once China penetrates the electronics and collects data from athletes, Eftimiades said, especially when some participants get targeted.

“Do they learn even immediately of athletes’ conditions? And does that impact how China performs at the Olympics, what decisions China makes?” he said.

Beijing’s Olympic Organizing Committee told state-owned media Xinhua News that all its actions will “strictly abide” by the laws of China.

“There is no trust with China—not in issues like this where their national face and potential threats to the Chinese Communist Party exist,” Eftimiades said. “It’s the red line for China.”

The 2022 Beijing Games are set to take place from Feb. 4–20. Diplomats from countries including the United States, Australia, Canada, the United Kingdom, Lithuania, and Taiwan will not be attending.

iFlytek didn’t respond to a request for comment by press time.