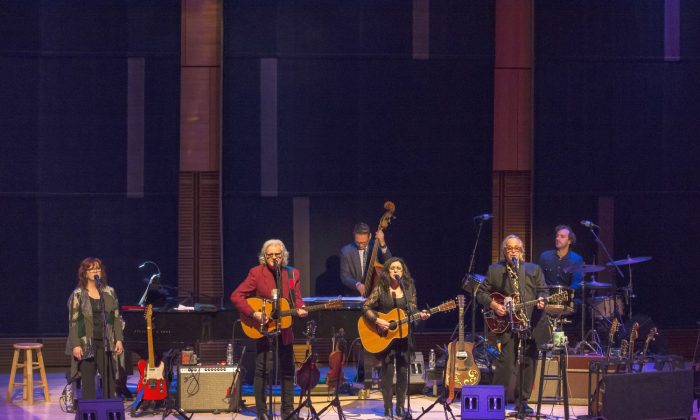 Master multi-instrumentalists Ry Cooder and Ricky Skaggs come together to deliver a revelatory program of blues, gospel, and bluegrass. They are joined by Sharon White, one of the most pristine voices in Southern music and a member of The Whites, a trio that includes vocalist sister Cheryl and multi-instrumentalist father Buck, who are also on hand. Joachim Cooder is on drums and Mark Fain on bass for this program hosted by Rosanne Cash. ( Jack Vartoogian)
Arts & Culture

NEW YORK—Cooder-White-Skaggs is a bluegrass/country super-group that came together at the suggestion of Rosanne Cash, who enlisted them to perform in her Carnegie Hall Perspectives series. The concert at Zankel Hall, which Cash introduced, was a night of dazzling instrumental virtuosity but also a testament to the artists’ musical predecessors as well as their religious faith and family bonds.

Sharon White is the singing star of the Whites and her father Buck White and sister Cheryl White joined the group on stage, Buck as a constant presence on piano and Cheryl occasionally joining in on vocals. Ricky Skaggs has been married to Sharon for more than 30 years, and the drummer Joachim Cooder is Ry Cooder’s son. The only one not related to any of the others was bass player Mark Fain.

Sharon played guitar throughout, but the fireworks were provided by Skaggs on mandolin and occasionally violin and Cooder on eight or nine guitars as well as banjo and mandolin. Buck’s piano was graceful throughout, whether in a barrelhouse style or in a more melodic vein. Skaggs sang in a high tenor while Cooder contributed the bass part.

In between numbers, the artists spoke about their connections to the music and earlier musicians. Skaggs announced at one point, “About the only thing newer than 1965 in this show is our bass player and our drummer.” Sharon said in her Southern drawl, “When you talk like this, you have to become a country singer.” Cooder reminisced about his childhood in California, where he fell in love with roots music by listening to it on the radio.

While this concert was confined to American roots music, Cooder is extraordinarily eclectic and is also responsible for the award-winning “Buena Vista Social Club,” the album and film that created world-wide interest in Cuban music.

The program included a number of country gospel songs, starting with “The Family That Prays (Never Shall Part)” and ending in “Reunion in Heaven.” In between there was the catchy “Walking in Jerusalem (Just Like John)” and “Wait a little longer, King Jesus.” Blind Alfred Reed’s “You Must Unload” is a warning to “money loving Christians” with smelly cigars that they had better mend their ways if they want to get to heaven.

The group rocked the Delmore Brothers’s “Pan American Boogie” with a sterling piano solo from Buck White and “The Family Who Prays” from the Louvin Brothers, Sharon White’s favorite of the brother groups.

Before performing the Stanley Brother’s staple, “Over in the Gloryland,” Skaggs told a story stemming from the time as a teenager playing in Ralph Stanley’s band. The leader’s bus had broken down and because Skaggs was already at the venue, he was asked to fill in until Stanley arrived. However, Skaggs knew only the group’s material, so that by the time Stanley got there, Skaggs had already performed the group’s whole set list.

The music veered into country with a lilting “Tennessee Waltz,” Kitty Wells’s “Making Believe” and Hank Snow’s “A Fool Such as I.” Rosanne Cash came out to sing an emotional lead on her father Johnny Cash’s “I Still Miss Someone.”

Next up in the Perspective series is the soul group St. Paul and the Broken Bones at Zankel Hall on Jan. 15, 2016. Cash described the lead singer as a white James Brown. On Feb. 20, Rosanne Cash and her husband, co-writer and musical director John Leventhal, will perform their entire Grammy winning album, “The River & The Thread,” at Carnegie’s Stern Auditorium/Perelman Stage.