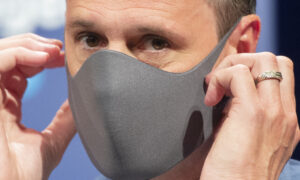 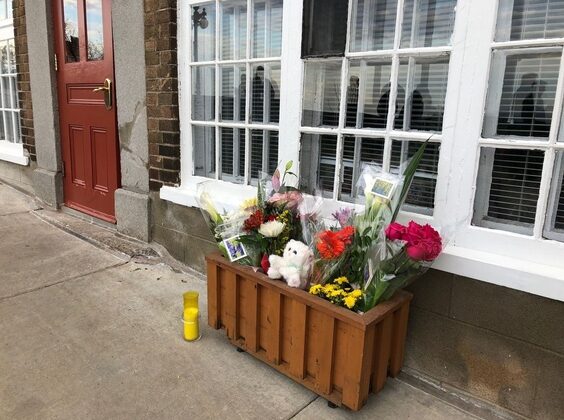 Flowers and a candle are placed in front of the house of a woman who died in the Halloween attack on Oct. 31, 2020, in Quebec City. (Anne-Sophie Thill/AFP via Getty Images)
Canada

QUEBEC—A deadly rampage through the streets and alleyways of Old Quebec overnight Saturday broke the silence of a quiet Halloween and rattled the residents of this small historic district, leaving them to mourn the loss of two of their neighbours.

Police officers and investigators patrolled streets and alleys on Sunday, placing evidence markers and taking photographs. They stood on street corners and cordoned off zones where they believe the suspect had travelled the night before, dressed in a medieval-style costume and carrying what the police said was a katana—a curved, two-handed Japanese longsword, which is traditionally honed to a razor edge.

The suspect, Carl Girouard, 24, had driven nearly 300 kilometres from his home just north of Montreal, Quebec City’s police chief said, and parked his vehicle in front of the Chateau Frontenac, the storied hotel whose image appears on Quebec City souvenirs. Just before 10:30 p.m., he began his attack in the square next to the hotel.

At the same time, a few hundred metres away, on Parloir St., Ariane Genest stepped out of her apartment for a cigarette. She began to see police officers racing through the streets. An officer saw her, she recalled, and screamed “get back into your home!”

Startled, she raced back inside, locked her door and grabbed a kitchen knife. “I was freaking out,” she said. “It’s like surreal, to think that it’s happening here, in Quebec.” She sat in fear as police dogs and tactical officers patrolled the streets in search of the suspect.

The night had been quiet until that moment. A few trick-or-treaters had been out earlier, but they had since returned home, Genest said.

In fact, it had been much quieter than usual in Old Quebec recently because of partial coronavirus lockdowns. Under different circumstances, half a dozen locals said, more people would have been present, out for evening walks or enjoying the view of the river below.

“Under a normal time, last year, there would have been a lot more people. With the restaurants and the bars closed, it could have made a big difference,” said Brian Magher, who lives in the area.

A friend of Magher’s had texted him early Sunday morning, telling him not to go outside. He had seen the lights of the police cars and heard the sirens, but had stayed indoors. “We were lucky,” he said.

Much of Old Quebec sits atop a hill overlooking the St. Lawrence River. The city was a colonial-era fortress and is surrounded by ramparts. Millions of tourists flock here each year, but a small group of Quebecers calls the historic district home.

“It’s completely random,” said Michel Guilbault, who lives in the old city and manages a small grocery store close to the Chateau Frontenac. “Quebec City is one of the safest cities in the world.”

International news outlets reported on the killings and television news crews tried to retrace the steps of the suspect through the streets on Sunday.

Girouard, the suspect, had made his way through alleys, in front of churches and past monuments, attacking seven people, the police said.

Blood stained the concrete on one street that leads toward the ramparts and the port where Girouard was eventually apprehended around 1 a.m.

Two of the victims, Suzanne Clermont, 61, and Francois Duchesne, 56, died. They were locals. Clermont was a hairdresser, Duchesne was the director of communications and marketing at the Musee Nationale des Beaux-Arts du Quebec.

A group of neighbours gathered outside Clermont’s home on Ramparts St. on Sunday afternoon and grew larger as night fell. They lit a candle and laid flowers on her doorstep.