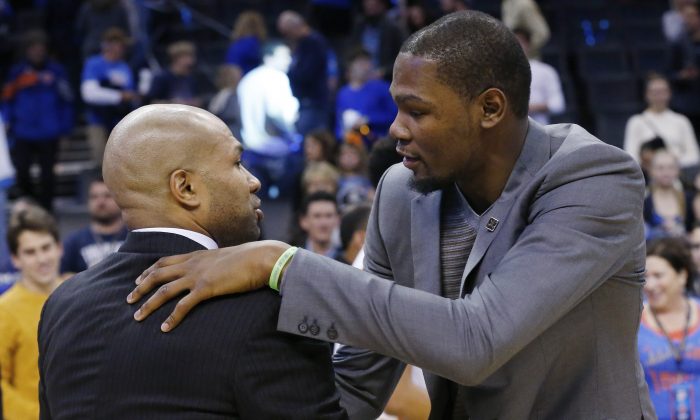 The Oklahoma City Thunder have some life with the return or imminent return of their two superstars.

The Thunder could get another huge boost this week with the return of Kevin Durant.

The star looked good in practice on Saturday, making it through most of the session.

“Kevin continues to progress well,” coach Scott Brooks told NewsOK. “Thought he had a really good day and will continue to build on that.”

Brooks said a definite return isn’t set yet but didn’t rule him out for Tuesday’s game against the New Orleans Pelicans.

“Don’t know,” Brooks said. “Don’t know. We just want to continue to put up good days on top of each other. We’ll let you know at the appropriate time.”

Durant has previously spoken about the desire to win a title, indicating he may leave if the Thunder can’t snag at least one over the next two years.

The Thunder need to go 45-21 from here on out just to match the 49 wins it took the Dallas Mavericks to make the playoffs last year, and would be facing an uphill battle as a lower seed.

“Just as so many believed that the odds of LeBron James becoming a free agent last summer would increase with a loss to the San Antonio Spurs in the Finals, the widely-held belief around the league now is that the odds of Durant leaving Oklahoma City will spike if he doesn’t win a title (or two) in the next two seasons,” reported USA Today.

“From his hometown Washington Wizards to the Los Angeles Lakers and everywhere in between, they’re just fine if the free agency noise that is already building around Durant got even louder with a once-unthinkable absence from the playoffs.”

The other star on the team, Russell Westbrook, helped the Thunder beat the New York Knicks in his first game back from injury.

Westbrook had 32 points on 12-of-17 shooting along with 7 rebounds and 8 assists in just 24 minutes of action.

“It was exciting, man,” he told the Associated Press.

“I’m just blessed to be able to go out and play the game I love to play, especially with my teammates. The crowd was great, the energy was high. So it was fun to be out there.”

“The crowd helped me out,” he said. “I’ll fight through it. Just keep going and keep going, and hopefully, somebody calls a timeout.”

Grant Jerrett also played after dealing with ankle surgery over the offseason.

The second-year player made his NBA debut despite signing with the Thunder way back in April 2013.

He had seen some action in the D-League but not with the Thunder until now.

“Thought I was gonna be nervous, but I wasn’t,” he told NewsOK. “It felt good. It’s a moment that’s gonna stay with me forever.”

Herett hoisted five 3-pointers in eight minutes, making one of them.

“Nah,” Jerrett said, when asked if his teammates encouraged him to get a ton of shots up. “Well, Perry (Jones) did. But they were open, so I just took them. The one I made actually felt the worst out of all of them.”

“I told him yesterday after the game: ‘Man, you can’t even stop smiling, boy you so happy you hit your first NBA bucket,'” Kendrick Perkins said. “But I’m happy for Grant. He’s been working hard. You always like to see a guy like Grant get a feel for the game and play a bit.”