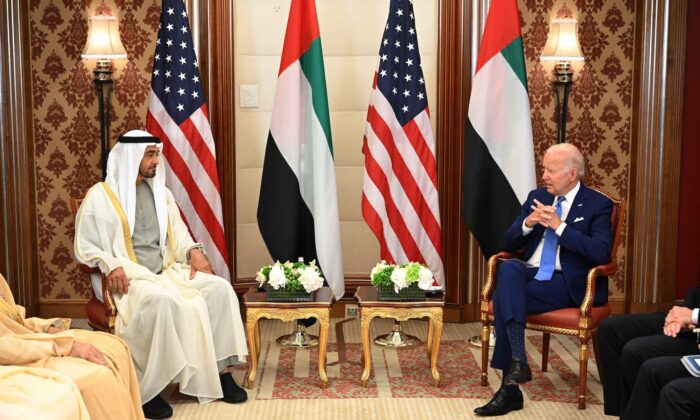 Oil prices rose on July 18 as the U.S. dollar softened and after President Joe Biden wrapped up his trip to Saudi Arabia, failing to secure a pledge from the Middle Eastern country to boost crude output.

U.S. West Texas Intermediate (WTI) crude futures for August delivery gained $4.53, or about 4.7 percent, to $102.10 a barrel, after climbing 1.9 percent in the previous session.

Last week, both Brent and WTI posted their biggest weekly drops in about a month as recession fears dented market sentiment.

Yet, oil supplies remained tight and the U.S. dollar has eased off recent highs, with both factors offering support to crude prices.

The greenback weakened on July 18 after hitting multi-decade highs against a basket of currency peers last week. The DXY dollar index touched nearly 109 on July 14, before slipping to 107.45 by 4 p.m. EDT on July 18.

A weaker dollar tends to support oil prices and other dollar-denominated commodities as it makes them a more attractive buy for holders of other currencies.

Some analysts said that the July 19 oil rally is unlikely to last, with high inflation maintaining pressure on central banks to keep tightening even in the face of growing signals of an economic downturn.

“Bear market bounce” is how Keith McCullough, CEO of investment research firm Hedgeye, described the moves in crude, in a post on Twitter.

Buoyed by a weaker greenback, other commodities rose, including wheat and copper. A key industrial input, copper is seen by many analysts as a barometer of a recession.

“Another good example of a crashing market that’s bouncing this morning,” McCullough said of the action in the price of copper, which rose over 3 percent on Monday morning after tumbling 8.2 percent last week.

Wheat futures on the Chicago exchange rose 1.6 percent on July 18, recovering from their lowest in around five months.

The July 18 moves in the price of oil and other commodities come on the heels of Biden’s visit to Saudi Arabia, which wrapped up without a pledge for the Kingdom to boost oil supply. Biden has called on Saudi Arabia and other Gulf oil producers to ramp up oil production in a bid to cool high gasoline prices and, more broadly, inflation.

Inflation in the United States, as measured by the Consumer Price Index, accelerated in June to a fresh 40-year high of 9.1 percent.

Despite the rally in a number of commodities, they’ve trended downward in recent weeks, suggesting inflationary pressures may be easing.

Gasoline prices have dropped over the past several weeks, with GasBuddy analyst Patrick De Haan saying in a July 17 statement that the most common gas price in the United States was $3.99 per gallon. The median gas price stood at $4.39 a gallon nationwide, while the top 10 percent most expensive locations averaged $5.71, De Haan added.

Despite no pledge from Saudi Arabia to boost output, Biden administration officials held out some hope for a little more supply-side relief.

Amos Hochstein, a senior State Department adviser for energy security, said on CBS’s “Face the Nation” on July 17 that, following Biden’s trip, several Gulf oil producers would be taking “a few more steps” to boost output, though he did not say which countries and by how much.

But analysts at ING said in a note that the Biden administration’s view that producers in the Middle East would boost output seems rosy and “comments from Saudi Arabia were less optimistic.”

“The Saudis have said that any changes in output would be done within the broader OPEC+ framework, and that the group would monitor the market and respond if needed,” they wrote, adding that, with the exception of Saudi Arabia and the United Arab Emirates, there’s “little in the way of spare capacity.”

Markets will be watching the Aug. 3 OPEC+ meeting closely for supply signals as the cartel’s current output pact expires in September.