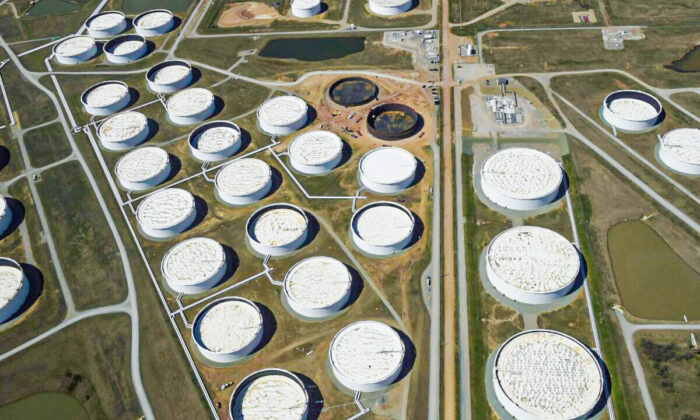 Crude oil storage tanks are seen from above at the Cushing oil hub, in Cushing, Okla., on March 24, 2016. (Nick Oxford/Reuters)
Market Watch

Crude oil futures rose after the Biden administration announced the release of 50 million barrels of oil from the nation’s Strategic Oil Reserve on November 23, enough for approximately 3 days of demand.

“The market is up on the lame nature of the U.S. swap program, the small numbers actually involved, and the lack of commitment by the Chinese,” said Robert Yawger, executive director of energy futures as Mizuho Securities, in a note reported by Marketwatch.

President Joe Biden told reporters at a White House briefing that “It will take time, but before long you should see the price of gas drop where you fill up your tank,” with the president adding that the effects would not happen “overnight.”

The White House said that the move was coordinated with China, India, Japan, South Korea, and the UK, which were also releasing reserves, according to the administration. Biden and the head of the Chinese communist regime Xi Jinping allegedly discussed the plan in their recent phone conversation.

Prior to the release order, the Biden administration made repeated calls to OPEC+ producers and their allies to increase global oil production, which were rebuffed. OPEC+ said it would stick by its plan to continue to slowly raise output in monthly increments of 400,000 barrels a day.

OPEC members may rethink their existing plans to gradually increase output in the event of a coordinated release of supplies from the U.S. strategic reserves, Bloomberg reported. OPEC+ is set to meet again on December 2.

Republican Sen. John Barrasso of Wyoming, in response to the White House’s initial announcement said, “President Biden’s policies are hiking inflation and energy prices for the American people. Tapping the Strategic Petroleum Reserve will not fix the problem, we are experiencing higher prices because the administration and Democrats in Congress are waging a war on American energy.”

This comes after Biden saw his lowest approval ratings amid blame from voters due to rising inflation, national COVID mandates, and high energy prices. The administration’s efforts to minimize drilling, closure of pipelines and support of renewable energy have played a role in decreasing U.S. oil output.

Reuters, the Associated Press contributed to this report.