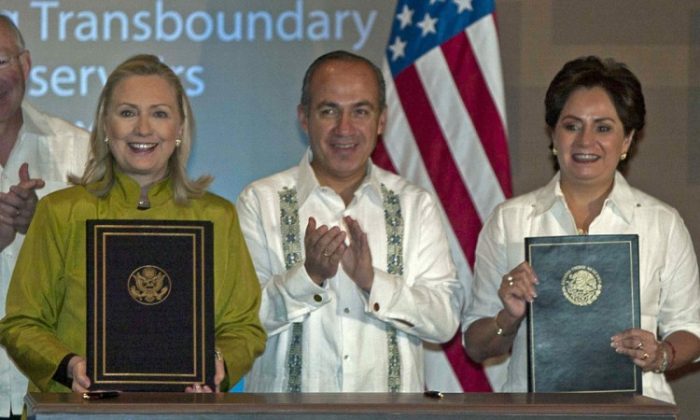 Oil and Gas Deal Signed by US, Mexico

The United States and Mexico signed an accord on Monday to cooperate in working to explore and develop oil and natural gas reserves along the maritime border in the Gulf of Mexico between the two countries.

U.S. Secretary of State Hillary Clinton and Mexican Foreign Minister Patricia Espinosa signed the agreement in Los Cabos, Mexico, but it now requires the American Congress and Mexico’s legislature to agree on the terms.

Mexican President Felipe Calderon and Department of the Interior Secretary Ken Salazar, who said the deal would provide access to “promising areas in the resource-rich Gulf of Mexico and establishes a clear process” between the two nations, also attended the signing.

The Department of the Interior said the deal would lead to accessing 1.5 million acres of the U.S. outer shelf for exploration and development, while freeing up resources that were off limits for both countries due to a moratorium that would expire in two years. The agency said the area could contain as much as 172 million barrels of oil and 304 billion cubic feet of natural gas.

“This agreement creates new opportunities. And for the first time, American companies will be able to collaborate with PEMEX,” which is considered a virtual monopoly in Mexico’s energy industry, Clinton said, according to a transcript.

“In tough times like these, we need to make the most of every opportunity to create jobs, to foster economic growth and energy security, while managing our resources and our environment responsibly for future generations,” she added.

At the same time, she said, opening up the maritime reservoirs would help both countries. The borders “don’t necessarily stop neatly at our maritime boundary,” she added, which “could lead to disputes if a company discovers a reservoir that straddles the boundary-disputes, for example, over who should do the extraction and how much they should extract.”

The United States and Mexico signed a treaty in 1978 that officially declared their maritime borders and in 2000 redrew it to reflect the boundary of the continental shelf. Later in 2000, the two countries placed the moratorium on exploration and development, while in 2010, Calderon and President Barack Obama extended it to 2014 in the wake of the massive BP oil spill.

Calderon said the deal would prevent the “the exploiting of deepwater petroleum exploration in the Gulf” as it would establish rules in an area where there were none, according to a press release.