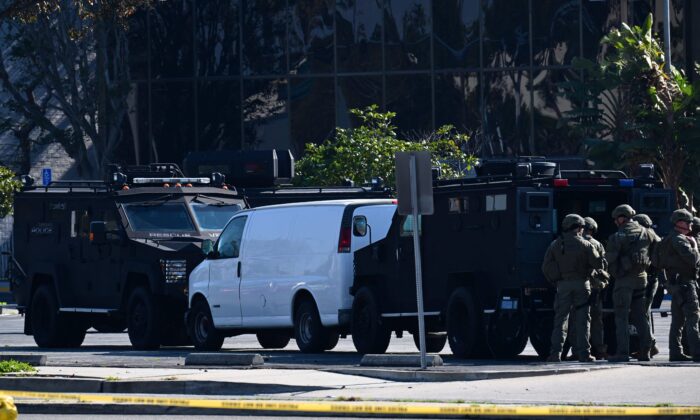 Law enforcement personnel outside the site in Torrance, Calif., where the alleged suspect in the mass shooting in which 10 people were killed in Monterey Park, California, is believed to be holed up on Jan. 22, 2023. (Robyn Beck/AFP via Getty Images)
By Jack Phillips

A gunman opened fire at a Los Angeles-area ballroom dance studio following a Chinese Lunar New Year celebration, killing 10 people and setting off a manhunt for the suspect.

Another 10 people were wounded and were taken to hospitals, where their conditions ranged from stable to critical, Los Angeles County Sheriff Robert Luna said in a Jan. 22 morning news conference. A suspect hasn’t been arrested yet in the Monterey Park shooting.

The suspect that fled the scene “remains outstanding,” Luna said, and is a “male Asian,” but other details were not provided.

After the news conference, Luna released a photo of the purported suspect on Twitter. Officials have determined that the unnamed individual should be “considered armed and dangerous.”

On Saturday January 21, 2023 at 10:22 PM the suspect male/adult/Asian pictured above was involved in a shooting. Investigators have identified him as a Homicide suspect and he should be considered armed and dangerous.
Contact LASD Homicide with any information at 323-890-5000. pic.twitter.com/2gPUBBybvv

Witnesses provided police with different descriptions of the suspect, and there’s currently an active manhunt for him, Luna said.

“We need to get this person off the street as soon as possible,” he said.

The scene unfolded on the evening of Jan. 21 in Monterey Park, a city of about 60,000 people on the eastern edge of Los Angeles that’s composed mostly of Asian immigrants from China or first-generation Asian Americans. Officials said officers then went into the ballroom and found victims as firefighters treated the wounded.

The shooting happened in the heart of downtown Monterey Park where red lanterns decorated the streets for the Lunar New Year festivities. A police car was parked near a large banner that read “Happy Year of the Rabbit!” The celebration in Monterey Park is one of California’s largest and had attracted tens of thousands of people throughout the day.

“Jill and I are praying for those killed and injured in last night’s deadly mass shooting in Monterey Park,” Biden wrote on Twitter on Jan. 22. “I’m monitoring this situation closely as it develops, and urge the community to follow guidance from local officials and law enforcement in the hours ahead.”

Earlier on Jan. 22, Capt. Andrew Meyer from the Los Angeles County Sheriff’s Department Homicide Bureau confirmed that 10 victims were pronounced dead at the scene and 10 additional victims were taken to nearby hospitals.

Meyer at the time noted that no further information on the type of firearm used in the shooting was available and that it was too early in the investigation to know whether the gunman knew the victims.

During the Jan. 22 morning press conference, neither Luna nor any other officials elaborated on the type of weapon used. They also didn’t make any statements on a possible motive.

The sheriff’s department had earlier told reporters that it didn’t know whether the attack was racially motivated.

Police were investigating another incident in the nearby city of Alhambra, where a similar business, the Lai Lai Ballroom, had police tape across its front door and an officer guarding it. Detectives could be seen working near the open back door, where a woman wearing gloves was carefully examining the door handle as though checking for prints. Officials gave no details on what had happened and it was unclear whether the incident was connected to the Monterey Park shooting.