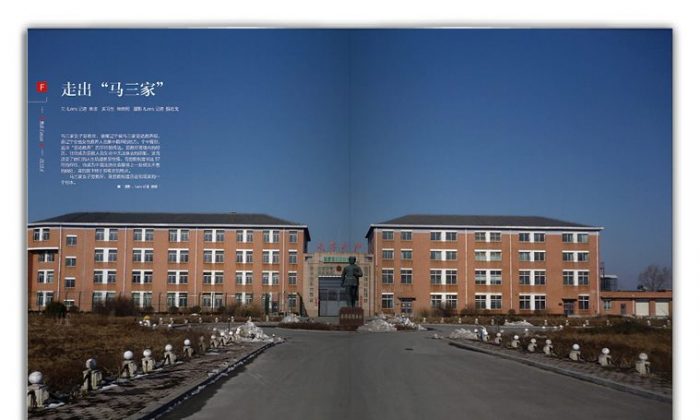 A screenshot of the beginning of a long and detailed article published by Lens magazine on April 6 about the torture that takes place in the Masanjia Labor Camp in northeastern China. Soon after Lens published its exposé, state-run media influenced by former Communist Party head Jiang Zemin attacked, claiming the article was a fabrication. (Epoch Times)
China

Less than two weeks after Lens magazine in mainland China blew the whistle on the torture taking place in China’s Masanjia Labor Camp, another magazine from the same company has revealed the existence of a nationwide network involved in trading organs. This more recent article hints at an even larger story yet unreported by mainland China’s media involving atrocities committed by the regime.

In an April 15 article in the business magazine Caijing investigative reporter Xu Qianchuan documents ties between individuals involved in illegally selling kidneys and the regime’s courts and military hospitals.

The article breaks important new ground on a story that has been percolating for over a year. In February 2012 Caijing reported on illegal organ trading in China, and since then the regime has on several occasions announced busts of gangs selling illegally obtained kidneys.

Xu spent one year investigating the case of Zheng Wei, whose trial began in February 2012 in Beijing. Zheng was the alleged leader of a team of 15 who are said to have provided over 50 kidneys for transplantation, earning US$1.6 million (10 million yuan).

How Zheng and others managed to carry this off had not previously been explained.

As Epoch Times commentator Heng He observed about the Zheng Wei case in an October 2012 article, “For a regular criminal, a member of a street gang, creating a sophisticated organ transplant system by himself would be almost impossible.”

Xu Qianchuan’s reporting helps fill some of the gaps. Xu said that with the help of “friends,” he read the entire set of trial documents, including the interrogation records. Beginning in March 2012, he conducted interviews in Beijing, including with members of the urology department of the 304 Hospital (the military hospital that treats the Chinese regime’s leaders), and at the villa rented by Zheng Wei.

“Behind the simple act of ‘selling a kidney to buy an iphone’ is the crime involving the medical system and the military.… Absent in the trial are the roles played by the Grade 3 [first-class] Military Hospital and an intermediate people’s court, which thereby escaped responsibility in the case,” Xu wrote.

“Through the Zheng Wei case we outlined a network with links to the illegal organ industry, including hospitals, courts, intermediaries, doctors, death row inmates, donors, and recipients,” Xu wrote. “Zheng Wei’s ‘rating’ of other kidney provider organizations and the cooperation between each other indicates that the network covers the entire country.”

Xu’s article was very soon unpublished from the Caijing website and other Chinese media did not pick it up. During its brief time online, the article attracted strong interest, and its removal likely reflected a power struggle taking place behind the scenes.

In showing there was systematic involvement by officials in the activities of Zheng Wei’s gang, Caijing hinted at much greater crimes carried out by the regime. A network such as Zheng described needs to have been in place to carry out the atrocity of forced, live organ harvesting from Falun Gong practitioners and other prisoners of conscience.

Harvesting organs from Falun Gong practitioners began soon after then-Chinese Communist Party head Jiang Zemin launched a campaign in July 1999 to eradicate the spiritual practice. He established the 610 Office, an extra-constitutional Party organ, to carry this out.

“There is a mechanism in China that facilitates 10,000 organ transplantations per year, many of them scheduled on two- to four-weeks notice,” said Dr. Torsten Trey, executive director of Doctors Against Forced Organ Harvesting, a group of medical doctors who are working to end illegal organ harvesting.

“The findings of Xu Qianchuan come very close to what we have already anticipated in our analysis,” said Trey. “There are plenty of hints that suggest that military hospitals, the courts, and likely the 610 Office are involved in this organized, illegal organ business.”

Canadian international human rights lawyer David Matas, co-author with former Canadian Secretary of State (Asia-Pacific) David Kilgour of the groundbreaking investigative report “Bloody Harvest: The Killing of Falun Gong For Their Organs,” estimates that approximately 8,000 of the organs transplanted each year are taken from Falun Gong practitioners, killing them.

Caijing magazine is rumored to be closely associated with the new CCP head, Xi Jinping, who has been involved in a power struggle with Jiang Zemin and his faction.

Both Caijing’s investigative report into organ harvesting and the April 6 exposé by Caijing’s Lens magazine of torture in Masanjia have put pressure on Jiang.

With both stories, crimes Jiang Zemin has sought to keep in the dark have been brought closer to disclosure.

Written in English by Gisela Sommer.