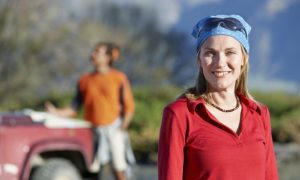 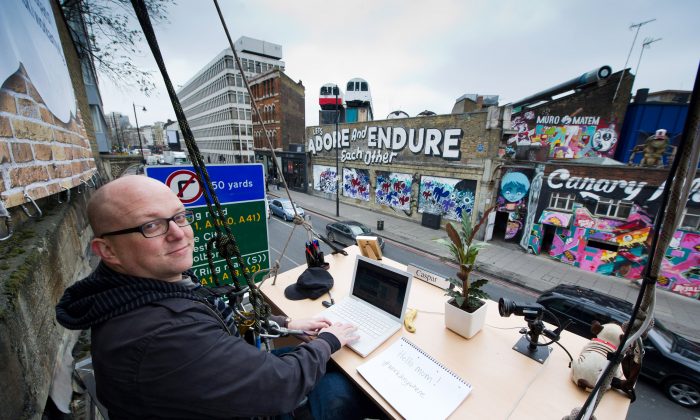 An office worker works at a desk suspended from the outside of a building at Peter The Pleater in London, England. Taking flexible working to new heights, O2 is proving you really can work anywhere. (Ian Gavan/Getty Images for O2)
Fitness & Nutrition

Office Workers, Stand up From Your Desk for Two Hours a Day

We’ve known for some time that too much sitting increases your risk of diabetes, certain cancers, heart disease and early death. But until now it’s been unclear how much standing during the work day may counter this increased risk.

Guidelines published today in the British Journal of Sports Medicine urge employers change their workplace culture and social norms around the sedentary office. It recommends desk-based office workers spend at least two hours of their working day standing or moving, and to gradually progress to four hours.

Commissioned by Public Health England and Active Working Community Interest Company, an international group of experts from the United Kingdom, United States and Australia (including myself) spent several months reviewing the existing evidence. There was much lively “debate” and several revisions before reaching the final recommendations.

As well as two hours of standing and light activity such as light walking each day (progressing to four hours), the guidelines recommend:

The recommendations are based largely on observational and retrospective studies or short-term intervention studies showing breaks from sitting reduce the risk of developing heart disease and metabolic disorders such as diabetes. Clearly, longer-term intervention studies are needed and future refinements to the guidelines will be required as more evidence is published.

There are two elements of the recommendations that could be easily overlooked but are of great importance. First, the two and eventually four hours a day of standing and light activity should be accumulated across the working day to avoid introducing other harms associated with prolonged static standing. These include blood pooling in the lower legs and feet and varicose veins.

Regularly breaking up prolonged seated work with standing-based work is the key message here. This is consistent with the 2014 Australian Physical Activity and Sedentary Behaviour guidelines that recommend adults to “minimise the time spent in prolonged sitting” and “break up long periods of sitting as often as possible”.

Second, the initial guidelines provide the platform for employers to further raise awareness among employees that prolonged sitting, aggregated from work and leisure time, may significantly increase disease risk. Adults who sit for ten hours per day have an estimated 34% higher risk of early death, even if they exercise regularly.

The use of a sit-to-stand adjustable work desk is one solution to the problem of prolonged sitting in the workplace. But these desks shouldn’t be viewed as the only solution. It’s also important to note that long-term studies of the likely impact on health outcomes are not yet available.

Employers should provide alternative ways of working to those that have become so ingrained in modern workplaces.

A glaring example is long meetings where participants must sit, uninterrupted. Organisations such as the National Heart Foundation of Australia are now instituting “standing agenda items” so participants can stand up and move around the room. In the past this may have been seen as being disruptive.

Other organisations are providing headsets that allow workers to move about during long phone calls.

Many offices are removing personal waste bins and opting for a central bin to encourage movement.

If you need a prompt to get up and moving at work, give up the chair for a day on June 11 for the campaign On Your Feet Australia. It might also give employers the nudge they need to start changing sedentary workplace cultures to improve their employees’ health and reduce the nation’s burden of heart disease and diabetes.

David Dunstan is Professor and Laboratory Head of Physical Activity at Baker IDI Heart & Diabetes Institute. This article was originally published on The Conversation. Read the original article.