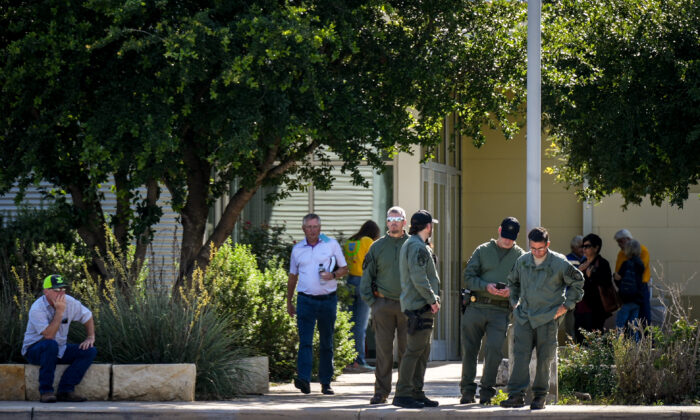 An off-duty Texas Border Patrol agent rushed into Robb Elementary School with a shotgun and rescued several-dozen children and his daughter during a mass shooting on Tuesday after his wife sent him a text message.

Jacob Albarado told the New York Times that he was getting a haircut when he received a message from his wife, a fourth-grade teacher at the school in Uvalde.

“There’s an active shooter,” she wrote, according to Albarado. “Help,” she sent, adding: “I love you.”

Albarado said he got out of his seat and took the barber’s shotgun to the school. His daughter, who went to the school, was locked inside a bathroom while his wife hid underneath desks with students, he told the outlet.

The suspect, 18-year-old Salvador Ramos, shot and killed 19 students and two teachers in another part of the school. Officials on Thursday said that he shot his grandmother, texted a stranger online that he was going to shoot up a school, crashed a truck, fired shots at a funeral home, and then apparently walked into the school, which was unlocked.

Albarado said he entered the school where his daughter was located before “clearing all the classes in her wing,” he told the paper. “I did what I was trained to do,” Albarado added.

He recalled that two police officers with guns drawn provided cover to him while two others led dozens of children and teachers to the sidewalk.

“I’m so angry, saddened, and grateful all at once. Only time will heal their pain and hopefully changes will be made at all schools in the U.S. and teachers will be trained & allowed to carry in order to protect themselves and students,” he said this week.

Meanwhile, there have been questions about the police response as it was revealed that Ramos remained inside the school for about an hour before he was shot and killed.

It was 11:28 a.m. when Salvador Ramos’ Ford pickup slammed into a ditch behind the low-slung Texas school and the driver jumped out carrying an AR-15-style rifle. Twelve minutes after that, authorities say, the 18-year-old Ramos was in the hallways of Robb Elementary School. Soon he entered a fourth-grade classroom. And there, he killed 19 schoolchildren and two teachers in a still-unexplained spasm of violence.

At 12:58 p.m., law enforcement radio chatter said Ramos had been killed and the siege was over.

What happened in those 90 minutes, in a working-class neighborhood near the edge of the little town of Uvalde, has fueled mounting public anger and scrutiny over law enforcement’s response to Tuesday’s rampage. “They say they rushed in,” said Javier Cazares, whose fourth-grade daughter, Jacklyn Cazares, was killed in the attack, and who raced to the school as the massacre unfolded. “We didn’t see that.”