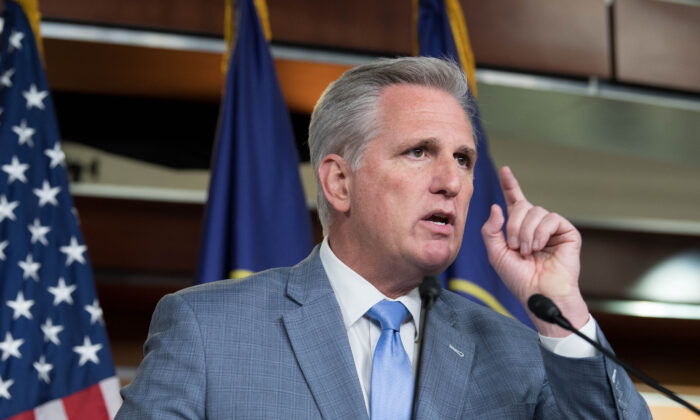 House Leader Kevin McCarthy (R-Calif.) suggested that socialists have expanded their power bloc in the Democratic Party, while asserting that Rep. Alexandria Ocasio-Cortez (D-N.Y.) has broader say on what legislation gets proposed.

McCarthy then said that socialists and progressives wield some power over Democratic leaders in the House, asserting that legislation cannot be passed unless Ocasio-Cortez agrees to it first.

In the past election, Republicans were able to take several more seats, giving Democrats a narrow majority in the House.

However, some high-ranking Democrats in the House and Senate have pushed back against the socialist labels, slogans, and progressive legislation.

“Stop sloganeering. Sloganeering kills people. Sloganeering destroys movements,” Rep. Jim Clyburn (D-S.C.), the No. 3 Democrat in the House, told Axios. “This foolishness about you got to be this progressive or that progressive. That phrase ‘defund the police’ cost Jaime Harrison tremendously. I’m not saying it was the only problem,” Clyburn added, saying that he was angry.

He added: “When you ask somebody, ‘Why would you want to defund the police?’ They’ll tell you, ‘That’s not what we mean. This is what we mean.’ My position is in politics, the moment you start explaining what you mean, you are losing the argument.”

Sen. Joe Manchin (D-W.Va.) also said the socialist messaging harmed Democrats’ chances of winning more elections in Congress on Election Day. At the same time, he told Fox News that he won’t vote in the affirmative on ending the filibuster or packing the courts, as some Democrats have threatened.

Manchin also criticized socialism, the push to defund the police, and Medicare for All proposals.

“That’s not the Democrats I know. And yet we’ve been tagged, if you’ve got a D by your name you must be for all the crazy stuff, and I’m not,” he said, calling on Democrats to govern from the center and not the fringes.