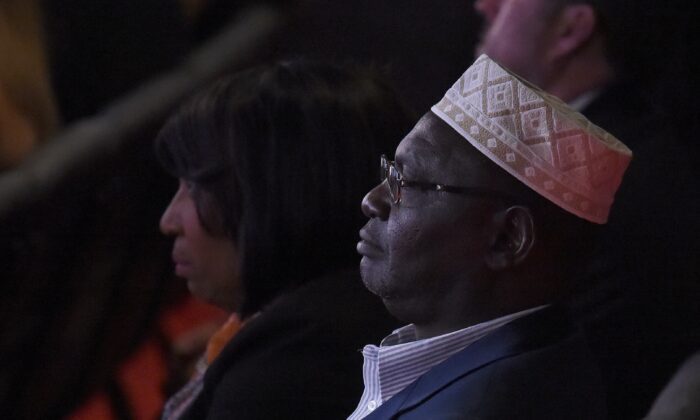 The half brother of former U.S. President Barack Obama, Malik Obama, watches the final presidential debate at the Thomas & Mack Center on the campus of the University of Las Vegas in Las Vegas, Nevada on Oct. 19, 2016. (Robyn Beck/AFP via Getty Images)
By Katabella Roberts

Malik Obama, the half-brother of former President Barack Obama, has endorsed the Republican candidate for governor in Pennsylvania, Doug Mastriano.

Taking to Twitter on Sunday, Malik Obama responded to a post from American conservative author and podcast host Jack Posobiec in which he suggested that the older Obama may like Mastriano and should “check him out.”

“​​If he’s with President Trump then I’m with @dougmastriano Pennsylvania Senator PA District 33,” Obama responded to the post.

Former President Donald Trump endorsed Mastriano in the primary race for governor earlier this year, saying in a statement that there is “no one in Pennsylvania who has done more, or fought harder, for election integrity than state Senator Doug Mastriano.”

The 45th president added that Mastriano is a pro-Trump, America First candidate who will fight crime, address election problems, promote pro-life policies, protect the Second Amendment, and support the U.S. military and veterans.

Shapiro’s campaign has promised to be pro-abortion and expand access to reproductive care, and “veto any efforts to restrict mail-in voting, expand early voting, and set up automatic voter registration.”

Sunday saw neither candidate receive more than 50 percent of the ballot in the race, meaning the two now head to a second-round run-off later this month.

The older Obama brother took aim at Lula on Twitter, stating that “Lula of Brazil is a jail bird,” in an apparent reference to the time Lula spent in prison after he was convicted on charges of money laundering and corruption at the state-owned oil and petrol company, Petrobras.

Lula spent 580 days behind bars before his conviction was overturned by the Supreme Court, which decided he should be tried in his state of residence instead of the state in which he was accused, paving the way for a 2022 presidential run. He is yet to be retried in court.

This isn’t the first time that Malik Obama has expressed his support for Trump. Back in 2016, the businessman told reporters that he planned to travel from Kenya to the United States in November to vote for the Republican presidential candidate. He previously worked in Maryland, where he was a registered Democrat.

“I like Donald Trump because he speaks from the heart,” Malik Obama told the New York Post from his home in the village of Kogelo. “Make America Great Again is a great slogan. I would like to meet him,” he said.

He also touted Trump as being a “down-to-earth kind of person” who “approaches issues directly and does not mince his words,” according to the newspaper.

During that same interview, Obama also said he was disappointed that the FBI had decided not to prosecute Democratic candidate Hillary Clinton over the controversial use of a private email server for public communications while she was secretary of state.

In response to his comments at the time, Trump wrote on Facebook: “Wow, President Obama’s brother, Malik, just announced that he is voting for me,” adding that he “was probably treated badly by [the] president—like everybody else!”

Malik Obama revealed last month that he has not spoken with former President Barack Obama since 2015 amid differing political views.