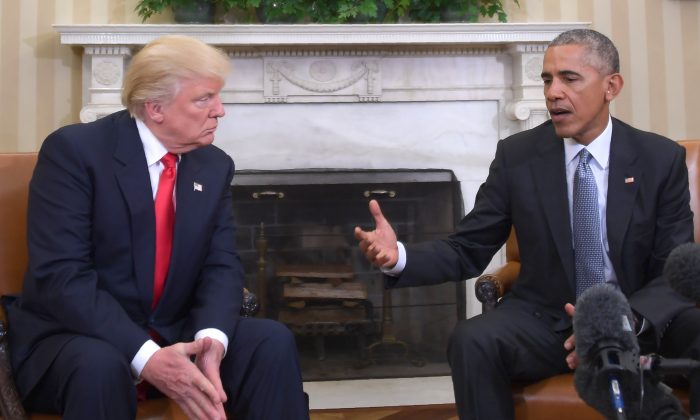 Obama Did Nothing About Russian Meddling to Help Clinton Win, Says Trump

President Donald Trump suggested on May 27 that President Barack Obama took no action to thwart Russian interference in the 2016 election in order to secure a victory for Hillary Clinton.

“Why didn’t President Obama do something about the so-called Russian Meddling when he was told about it by the FBI before the Election?” Trump wrote on Twitter. “Because he thought Crooked Hillary was going to win, and he didn’t want to upset the apple cart! He was in charge, not me, and did nothing.”

Why didn’t President Obama do something about the so-called Russian Meddling when he was told about it by the FBI before the Election? Because he thought Crooked Hillary was going to win, and he didn’t want to upset the apple cart! He was in charge, not me, and did nothing.

Text messages between senior FBI officials Peter Strzok and Lisa Page suggest that the Obama White House colluded with the CIA, FBI, and Senate Democrats in the early stages of the probe into the Trump campaign’s alleged ties to Russia. Investigations into how the probe was handled revealed that the Obama administration employed wiretapping, unmasking, secret subpoenas, and at least one spy to monitor and infiltrate the Trump campaign.

Amid the wide-ranging counterintelligence operation, the Obama administration never alerted candidate Trump that his campaign was the target of foreign interference.

The Department of Justice announced on May 20 that it is investigating whether anyone in the Obama administration engaged in infiltrating Trump’s campaign for “inappropriate purposes.”

The investigation into how the probe of Clinton’s use of a private email server was handled is likewise under scrutiny. The Page-Strzok texts show that Obama wanted “to know everything” about the investigation. Earlier this month, the Department of Justice watchdog, Michael Horowitz, submitted an “extremely long and thorough” draft report on the handling of the Clinton-email probe. The report is expected to lead to at least one referral for criminal prosecution, a source familiar with the findings told national security correspondent Sara Carter.

The DOJ presented at least some documents pertaining to the spy to members of Congress and officials from the Justice Department and the FBI on May 24.

The president’s attorney, Rudy Giuliani, told Fox News on May 27 that the president will refuse a subpoena from special counsel Robert Mueller unless details about the spy and the origins of the Russia probe are revealed to Trump’s team.

“If they don’t show us these documents, well, we are just going to have to say no,” Giuliani told Fox.

“We are more convinced, as we see it, that this is a rigged investigation,” the attorney told CNN in a separate appearance. “Now we have this whole new ‘Spygate’ thing thrown on top of it, on top of already very legitimate questions.”

To date, seven Obama administration officials who played a role in the surveillance operation on the Trump campaign have been referred for criminal investigation.