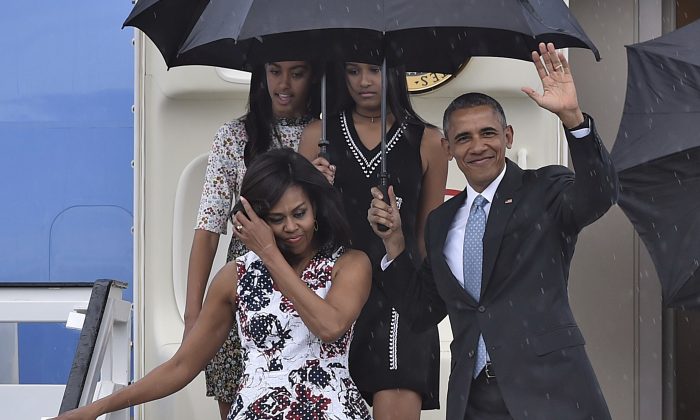 US President Barack Obama waves next to First Lady Michelle Obama (L) and their daughters Malia (L, behind) and Sasha upon their arrival at Jose Marti international airport in Havana on March 20, 2016. (Yuri Cortez/AFP/Getty Images)
China

Obama Carries His Own Umbrella in Cuba, Shocking Chinese Citizens

Chinese Internet users were stunned to see President Barack Obama clutching his own umbrella and sheltering the First Lady from the elements on the airport tarmac upon their historic arrival in Cuba.

Obama arrived at Jose Marti International Airport in Cuba on March 20 for a three-day visit, the first time a United States president has set foot in Cuba in 88 years. Relations between the two countries soured shortly after Fidel Castro’s rebels won the Cuban Revolution in 1959, and the U.S. ended diplomatic relations with Cuba and closed its embassy in 1961. The countries have been slowly restoring diplomatic relations since 2012.

After getting out of Air Force One, Obama could be seen holding an umbrella for himself and his wife Michelle Obama amidst a light rain, while his daughters Sasha and Malia shared another umbrella.

“Look at how the U.S. President holds his own umbrella. This is quite impossible in China, even for those low-level officials,” commented “Xianshan Red Leaves 75790.”

“Their leader is capable of taking care of himself. Many of our section leaders in China cannot even take care of themselves,” wrote a Zhejiang netizen going by the name “MARCO Mao.” A section leader is a low ranking Chinese Communist Party cadre.

Jilin netizen “zzdream” wrote: “So unlike from some of our disabled leaders, who need others to hold up an umbrella for them.”

“Being the U.S. President is not as impressive as being a section chief in China,” added “cat-with-glasses” from Liaoning. Even officials of middling rank, the comment seemed to indicate, have flunkies holding their umbrellas.

“A Zheng Yuan” from Sichan wrote: “Look at some of our officials, who behave like bureaucrats and are quick to put on airs. Just make a comparison!”

Chinese media is rife with stories of overly pretentious Chinese officials. On March 13, 2015, students at a junior high school in the city of Yulin in Guangxi Province were made to do physical exercises in the rain while school officials and visiting government cadres watched on from under their umbrellas, according to Beijing News. One government officials even had someone hold up his umbrella while school staff briefed him about the exercise the students were performing. The local education bureau only apologized to the students and their parents after Chinese netizens raised a ruckus about the incident.

In February 2008, Liao Xinbo, the former deputy chief of health bureau in Guangdong, was the subject of controversy when he was photographed speaking to poor villagers while an aide carried his umbrella, according to a report by Internet portal Sina.

Given the prevalence of Chinese officials like those listed above, it is little wonder that Chinese netizens always express amazement at the behavior of democratically elected foreign leaders.

In 2013, Gary Locke, then U.S. ambassador to China, caused a stir when he was photographed standing in line to buy his own coffee at an airport Starbucks.

In 2015, Chinese Internet users were stunned to see a photo of newly-elected Taipei Mayor Ko Wen-je traveling alone on the city’s subway without bodyguards or secretaries at his side. Mainland Chinese were more accustomed to seeing Party officials travel around China flanked by throngs of bodyguards.