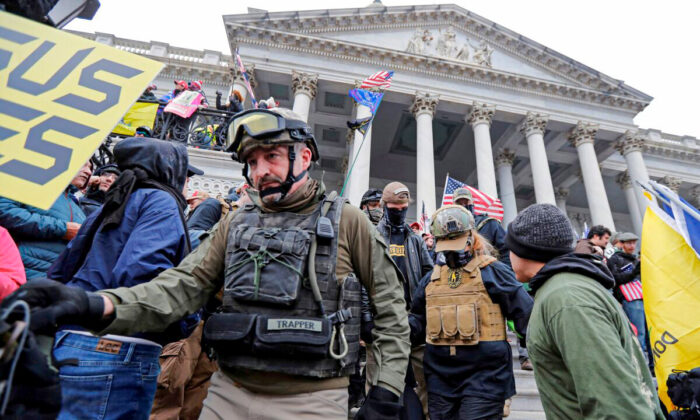 Members of the Oath Keepers are seen during a protest against the certification of the 2020 U.S. presidential election results by the U.S. Congress, at the U.S. Capitol in Washington on Jan. 6, 2021. (Jim Bourg/Reuters)
Judiciary

A Florida Oath Keepers leader charged with seditious conspiracy for alleged actions at the U.S. Capitol on Jan. 6, 2021, filed a motion to have the indictment against him dismissed, alleging selective prosecution compared to participants in the George Floyd riots and protests against the nominations of two U.S. Supreme Court justices.

Attorneys for Kelly Meggs of Dunnellon, Florida, filed the dismissal motion on July 12 in Washington before U.S. District Judge Amit Mehta. The judge has ruled against most Oath Keepers’ motions filed in the case, including a recent request for a change of venue from Washington to Virginia.

Meggs is one of nine individuals charged in a June 22 superseding indictment with seditious conspiracy and other counts related to an alleged plot to prevent the counting of Electoral College votes from the 2020 presidential election. All the defendants have pleaded not guilty.

Attorneys Stanley Woodward Jr. and Juli Haller said that under the Equal Protection Clause of the Fifth Amendment, criminal prosecution cannot be based on a suspect’s exercise of constitutional rights through participation in political activity.

They contrasted the seditious conspiracy and obstruction of an official proceeding charges lodged against Meggs with the handling of riots in Portland, Oregon, in the spring and summer of 2020.

“Not a single protester from Portland was charged in the George Floyd riots with obstruction of justice under §1512 despite burning courthouses, or sedition despite yells of ‘F… the United States’ while burning federal property,” the motion said.

The riots led to 74 people being charged with federal crimes including assaults on officers, arson, attempted arson, failing to obey lawful orders, and improper use of a drone, the motion said. Rioters tried to force their way into the U.S. Courthouse in Portland, chanting “[expletive] the United States,” the document said. They later set fire to the courthouse entrance.

“Nearly all of these charged were dismissed or marked nolle prosequi, with one action pending (and who was dismissed because he died before they could dismiss); and for the few that remained, the government agreed to recommend probation,” the motion states.

The U.S. Department of Justice joined as a plaintiff in a civil lawsuit against the Trump administration for damages and relief for arrests of Portland protesters, who were described as “people merely expressing grief,” the motion said.

By contrast, Acting U.S. Attorney Michael Sherwin said after January 6, “I wanted to ensure, and our office wanted to ensure, that there was shock and awe that we could charge as many people as possible before the 20th.

“And it worked because we saw through media posts that people were afraid to come back to D.C. because they’re like, ‘If we go there, we’re gonna get charged,’” Sherwin said.

“This statement makes a bias clear,” Woodward and Haller wrote in the motion.

During rioting in Washington in late May 2020, President Donald Trump was moved by the Secret Service into the bunker beneath the White House. Over five days, nearly 430 people were arrested, including 61 for felony rioting, six for assaulting a police officer, and 55 for burglary. None were charged with seditious conspiracy or obstruction of an official proceeding, the motion said.

During the 2018 U.S. Senate hearings for Judge Brett Kavanaugh’s nomination to the Supreme Court, protesters blocked hallways, unfurled banners, and prevented a senator from closing an elevator door, the motion said. Nearly 230 people were arrested. The document stated that most were charged with disorderly conduct, obstructing, or crowding, and paid fines between $35 and $50.

None of the nearly two dozen people who staged a sit-in during the confirmation hearings of Judge Amy Coney Barrett for associate justice of the U.S. Supreme Court in 2020 was charged with obstruction of an official proceeding or seditious conspiracy, according to the motion.

A group of six Oath Keepers defendants earlier filed a motion to dismiss the June 22 superseding indictment based on alleged prosecutorial misconduct. The motion alleged that prosecutors knew the pool of grand jurors would be heavily influenced by publicity surrounding the U.S. House’s Jan. 6 Select Committee, yet still sought a new superseding indictment against the Oath Keepers.

“The government opted to do so when the government knew the milieu of the District of Columbia is such that jurors or grand jurors cannot be presumed to be immune from the prejudicial influences of the Congress of the United States,” reads the motion, filed by attorney William Shipley.

Defendants in the case “have not identified any authority indicating that the government commits misconduct by obtaining an indictment in a case that has received extensive pretrial publicity,” Nestler wrote in reply to the motion. “Indeed, if that were the case, the government would be hamstrung in its ability to promptly indict the most heinous and notorious crimes.”