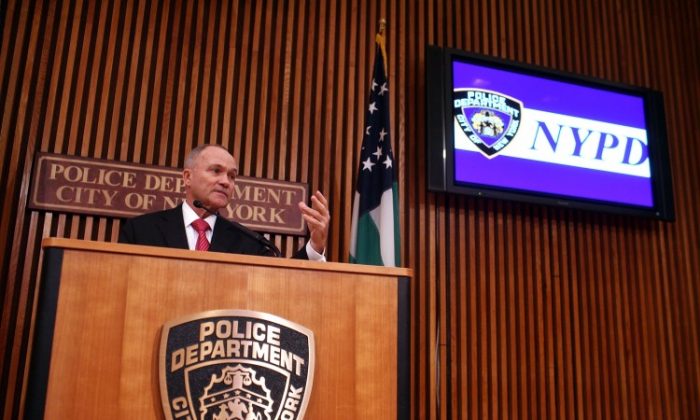 NEW YORK—Protesters from Northern Manhattan Restaurant and Lounge Association gathered on Thursday in front of police headquarters demanding action be taken against the NYPD’s Vice Squad regarding their handling of selling alcohol to minors.

The group of protesters acknowledged that selling alcohol to minors is wrong and that action should be taken against those at fault; however, they expressed concern over the number of times stings are set up at an establishment before a violation is issued.

“By waiting until a given establishment has accumulated three or more violations, in order to trigger the nuisance abatement law, they also deny business owners their constitutionally guaranteed due process rights,” spokesman Fernando Mateo said in a letter sent to Mayor Bloomberg.

Instead of corrective action being immediately taken, businesses are fined thousands of dollars and some are even closed with a padlock.

The restaurant owners also claim the nature of the raids far exceeds the crime. They claim the NYPD Vice Squad officers come into establishments during busy hours and “create a spectacle as though they are conducting a major drug bust,” Mateo said in his letter.

Mateo said a lawsuit would be filed in federal court on Thursday.

In response to the lawsuit Connie Pankratz, deputy communications director with the NYC Law Department said, “The dangers of the sale of alcohol to minors cannot be disputed. It is discouraging to hear that those who sell alcohol are seeking to restrict the police department’s lawful efforts to hold accountable those whose illegal conduct endangers the lives of our children.”