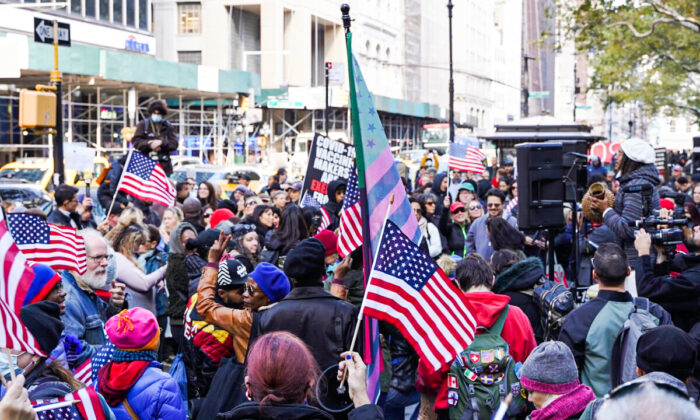 MANHATTAN, New York—Thousands of people gathered outside of New York City Hall on Wednesday afternoon to hold a rally and march across the Brooklyn Bridge as part of worldwide walkout protests against vaccine mandates and in support of freedom.

Most participants expressed opposition to vaccine mandates imposed by federal and city officials.

Notably, two of the featured speakers spoke out against a new bill that would cancel religious exemptions for all adults in New York and another bill that would require all children to take a shot in order to attend school.

One of these speakers was Michael Kane, founder of Teachers For Choice. Kane has been a teacher in the NYC Department of Education (DOE) for over 14 years and has filed a lawsuit against Mayor Bill de Blasio.

“In 2019, assemblyman Jeff Dinowitz from The Bronx introduced and successfully passed a bill that repealed the religious exemption to vaccination for all children in New York State,” Kane told The Epoch Times.

“So anyone under the age of 18 cannot get a religious exemption to vaccination in the State of New York to attend school.

“Now that same assemblyman has placed two bills to be considered for law in 2022. One of those bills would revoke the religious exemption for adults 18 and over.”

“The other bill would require a COVID vaccine mandate for all children to attend school. These are two separate bills, and both are very dangerous and scary for every New Yorker throughout the state,” Kane said.

In a response to a request for comment, the communications director at Dinowitz’s office wrote, “People who continue to choose to not get vaccinated for personal ideology, not based on legitimate medical science, are directly responsible for the continuation of this pandemic despite tens of millions of Americans making the responsible choice to protect our society against preventable diseases.”

“When New York stands up, the whole world stands up!” he said, stirring the crowd.

“I believe, in the next couple of weeks, we’re gonna have a million people marching down this street.

Another speaker was a 23-year Department of Education employee who has filed a sister case with Kane against the mayor.

He drew examples from history, such as the Revolutionary War, Boston Tea Party, and The Emancipation Proclamation.

He asked people to join next Wednesday with no signs or flags for a prayer vigil.

“This is a spiritual war. We gotta fight this war in the physical and in the spiritual.”

The Epoch Times reached out to City Hall for comment.