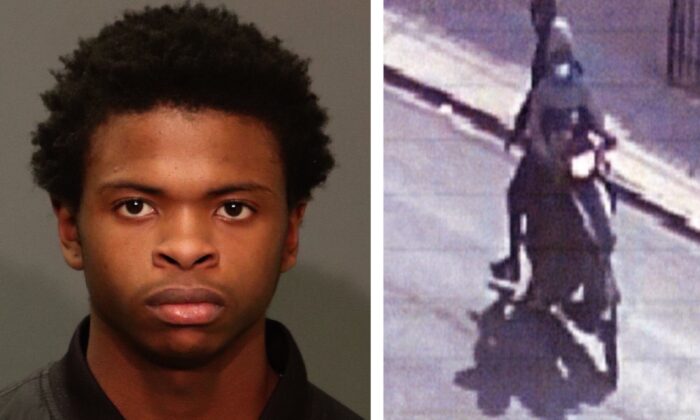 A 15-year-old boy in New York City is facing murder charges in connection to the fatal shooting of Kyhara Tay in the Bronx earlier this week, authorities said.

Keechant Sewell, the commissioner of the New York Police Department (NYPD), confirmed during a news conference that the teen, identified as Matthew Godwin, was arrested for murder, manslaughter, and possession of a weapon just before 2 a.m. on Friday.

Godwin was seen in surveillance footage on the back of a scooter as he opened fire on a 13-year-old boy, the intended target. The bullet missed the teen boy and instead hit Tay in the stomach.

“Instead of hitting his intended target … [Godwin] ended the life of a totally innocent, completely uninvolved 11-year-old girl,” Sewell said. “I won’t say she was in the wrong place, because why shouldn’t an 11-year-old child be able to stand outside in broad daylight?”

“The teenagers who took Kyhara’s life, a sixth-grader who, as her father said, didn’t even have the chance to grow up, …  have devastated a family, while at the same time ending their own lives as they know them,” she added.

Authorities have launched a citywide manhunt to arrest a second suspect, identified as 18-year-old Omar Bojang. He is believed to be the driver of the scooter.

A reward of up to $10,000 was being offered in connection with the case for information leading to an arrest. It is unclear if Godwin’s arrest came from a community tip.

This is Omar Bojang.

He is wanted in connection to the homicide of 11-year-old Kyhara Tay. Someone knows him.

Have any info on his whereabouts or this incident? DM @nypdtips or call 800-577-TIPS pic.twitter.com/q4hz7xU6xe

Bojang is no stranger to law enforcement officials and was arrested in June 2020 for gun possession and was also wanted for a robbery pattern. He is known to Bronx police in connection with gang activity.

In April 2020, Bojang and another male, identified as a “27-year-old Blood gang member,” were involved in a shooting. He was shot in the leg that day, an NYPC detective said during Friday’s press briefing. In November 2020, he got shot in the leg again during “an exchange of gunfire between Bojang and rival gang members,” the detective added.

NYC Mayor Eric Adams expressed frustration on Friday over a “flow of guns” and a surge of gun violence incidents in the city, saying the number of youth shooting victims is increasing as “younger and younger” children are obtaining firearms.

“This is what we’re dealing with over and over: kids killing kids—illegal guns are as easy to buy as candy and comic books. They are everywhere,” Adams said, adding that he has never witnessed anything like this before in his professional career.

Shooting incidents in the city rose by 16.2 percent during this period, while homicides dropped by 15.8 percent. In 2021, there were nearly 4,500 gun arrests, and 470 of those suspects were people under the age of 18, according to the NYPD.