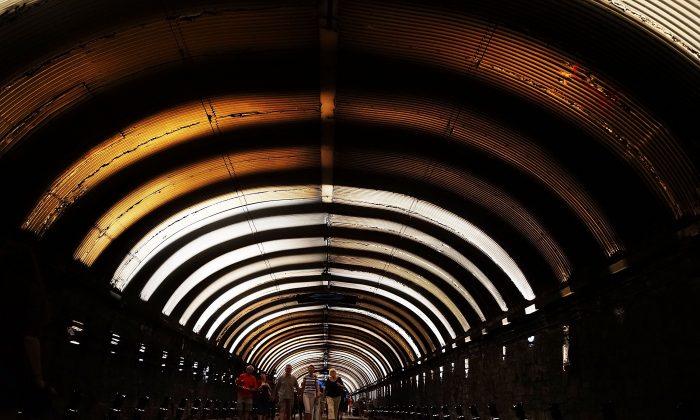 People walk through the Park Avenue Tunnel after it has been temporarily transformed into an art exhibition for the Summer Streets program, Manhattan, August 3, 2013. (Photo by Spencer Platt/Getty Images)
New York

A large amount of New York City’s public space is the streets. Most of the time, pedestrians have limited to no access to this vehicle-dominated space. However, this summer, miles of streets will be dedicated to pedestrian activities on the weekends.

Polly Trottenberg, NYC Department of Transportation commissioner, said, “I’m excited to announce, after what I have to say was a long, cold, snowy, difficult winter, the continuation of three of the best events in the summer in New York City.

Summer Streets is three consecutive Saturdays in the summer when nearly seven miles of Manhattan’s streets are closed to cars and opened for people to play, run, walk, and bike. This year Summer Walk will take place on August 2, 9, and 16 from 7 a.m. to 1 p.m. The route begins from Central Park, and continues along Park Avenue continuing onto Lafayette Street all the way to the Brooklyn Bridge. There are several rest stops along this route that feature different activities.

At the Park Avenue Tunnel, you can listen to a special sound installation called dive, which features sounds of the ocean. At the Midtown rest stop you can join in a picnic and play mini golf. At the Soho Rest Stop, you can rock climb. And at the Foley Square rest stop, you can even fly through the air on a 25-foot-high zip line.

This is the seventh year that Summer Streets is held in the city. Last year, over 300,000 people attended.

“When you’re out in the streets with no cars, you get to look at a lot of the icons buildings in New York with a whole new vista,” said Trottenberg.

Weekend Walks is a similar activity, where roads are closed off for pedestrian activity, but it is hosted in all five boroughs at different times. A different local partner hosts each Weekend Walk activity. For example, Sunnyside Shines BID will host their fifth Weekend Walk on July 26 at 46th Street between Greenpoint Avenue and Queens Blvd.

“Each year we invite local businesses and community organizations to help us transform our streets into true public spaces for the day, with musicians, hands on art projects, fitness activities, and games,” said Rachel Thieme, executive director at Sunnyside Shines BID.

The walk can showcase art, music, and dance performances, workshops and food. During this time, participating local restaurants can all offer outdoor cafe service, where alcoholic drinks can be served. So if you want to enjoy a cocktail in the sun, look up the upcoming Weekend Walks in your area.

In Manhattan, upcoming Weekend Walks include the Chinatown BID Family Festival on Mott Street between Canal and Worth Streets on June 28 from 1 p.m. to 5 p.m. The Chinatown Mid-Summer Festival will take place at the same location on July 13 and 20 at 11 a.m. to 5 p.m.

Finally, both pedestrians and drivers should take heed that beginning June 27 through Labor Day, north-south drives in Central Park above 72nd Street will be open exclusively to pedestrians and bike riders.