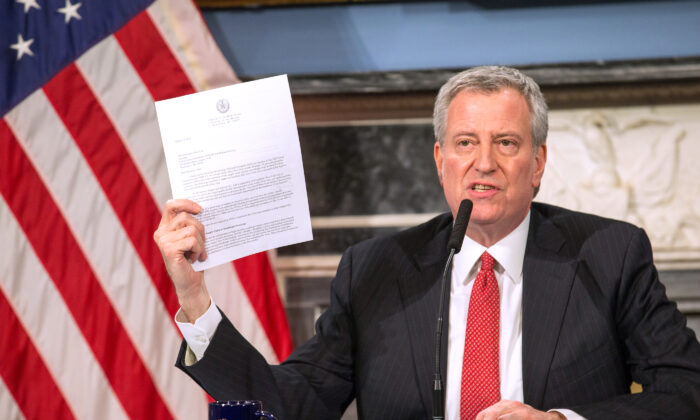 NYC Mayor Says City Will Likely Stay on Lockdown Until May

New York City Mayor Bill de Blasio said that his city, which has the most number of CCP virus cases in the United States, might be shut down until May.

“We think this crisis is going to grow through April and into May,” the mayor told ABC News on Friday morning. When he was asked about what will happen to the city’s schools and if they will be shuttered until that time, he responded, “I think we have to be ready for that.”

The comment comes after President Donald Trump this week said that he hopes that parts of the country are reopened by Easter Sunday, which lies on April 12 this year. On Thursday, he told a news conference that the United States has “to get back to work” amid the pandemic, as economic losses and unemployment claims continue to mount.

“This idea of Easter is, unfortunately, a false hope,” de Blasio remarked.

De Blasio then predicted that around half of New York City, which has a population of around 8.5. million, will be infected with the virus.

“For over 80 percent, [there] will be very little impact,” de Blasio told ABC News. “But 20 percent of the people infected, it’s going to be tough, and for some of them, it will be fatal.”

At least 365 people have died in New York City from the virus, which is more than twice as many across New York state, according to researchers with Johns Hopkins University. Most of the state’s COVID-19 cases outside of the city are in Westchester, Suffolk, and Nassau counties, which are all New York City suburbs.

“We have some, and I’m thankful for that, but it has to keep coming,” de Blasio said. “The president has to make that contract happen with the companies that can create ventilators not just for New York City and New York state, but for the whole country. This is going to get worse before it gets better.”

The mayor also pushed back against reports saying that some of the city’s hospital workers don’t have enough protective gear after the New York Post published a front-page story featuring doctors and nurses wearing garbage bags.

“The truth is we have again the supplies for this week and next. We have to make sure every hospital is getting them to their extraordinary, heroic medical personnel—the nurses and doctors everyone in those hospitals because supplies are here,” he added.