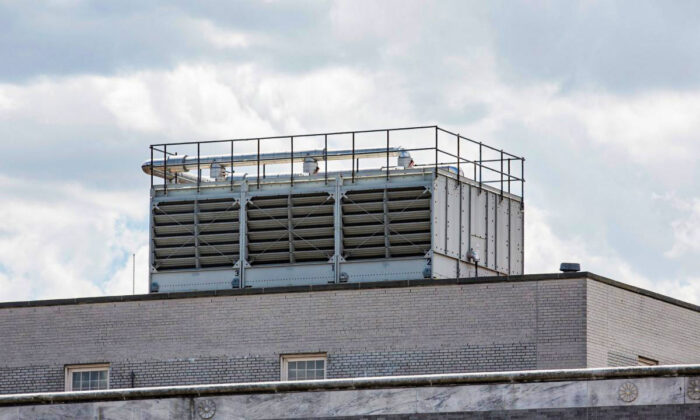 A water cooling tower that was found to have traces of legionella pneumophila bacteria, which may have helped cause the recent outbreak of Legionnaires' disease in the Bronx, is seen on top of the United States Post Office at 558 Grand Concourse, in the Bronx borough of New York on Aug. 13, 2015. (Andrew Burton/Getty Images)
NY News

The New York Health Department announced Friday that an investigation is being conducted into a community cluster of Legionnaires’ disease in the Highbridge neighborhood in the Bronx and adjacent areas.

Since May 9, four individuals have been diagnosed with the disease—a type of pneumonia characterized by flu-like symptoms, cough, fever, muscle aches, diarrhea, and breathing difficulties—with results pending for other people.

According to a press release by the health department, no one associated with the cluster has been reported dead. At 10 percent, the mortality rate for Legionnaires’ disease is high. It can be treated with antibiotics when caught early and is not found to be contagious generally.

People get infected when they breathe in water vapor that contains the bacteria, Legionella.

Legionella, which can cause Legionnaires’ disease and Pontiac fever, grows in lakes, streams, and other freshwater environments, says the Centers for Disease Control and Prevention (CDC). Legionella evolves into a health concern when it spreads in building water systems.

The health department is presently sampling and testing water from all cooling tower systems in the area where the cluster was discovered.

Due to the increase in COVID-19 cases, authorities are advising people to remain alert and get tested for both diseases if any symptoms crop up. Cooling towers, whirlpool spas, hot tubs, humidifiers, hot water tanks, and evaporative condensers of large air-conditioning systems are favorable for bacterial growth.

“Legionnaires’ disease can be effectively treated if diagnosed early, but New Yorkers at higher risk, like adults aged 50 and older, those who smoke or have chronic lung conditions should be especially mindful of their symptoms and seek care as soon as symptoms begin.”

There isn’t any issue consuming cold water from the tap as the bacteria is not dangerous when ingested through drinking water, according to the health department.

Meanwhile, the New Jersey Department of Health is investigating three cases of Legionnaires’ disease in guests who stayed at the Hilton/Hampton Inn Parsippany Hotel between July 2021 and October 2021.

Guests have all since recovered. The department, in coordination with the Parsippany-Troy Hills Health and Human Services Department, is trying to determine if the hotel was a possible source of these infections.

Samples have been collected from the building’s water systems while hotel management is taking action to disinfect the premises.

In 2018, health departments across the country reported nearly 10,000 cases of Legionnaires’ disease.