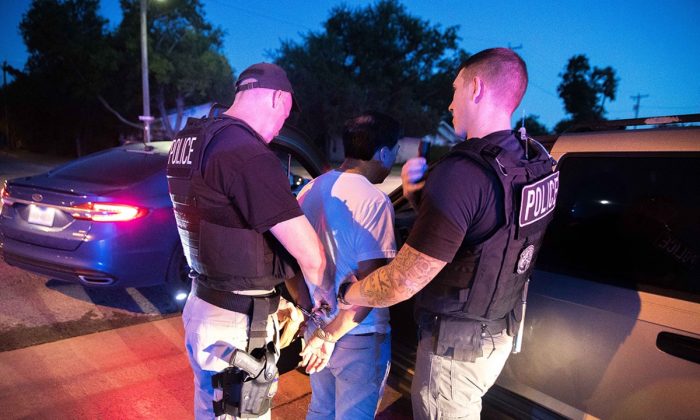 People in New York City may face fines of up to $250,000 if they refer to someone as an “illegal alien,” or threaten to call U.S. Immigration and Customs Enforcement (ICE) on someone “when motivated by discrimination.”

The NYC Commission on Human Rights announced on Sept. 26 that it released a new legal enforcement guideline (pdf) that clarifies that discrimination based on someone’s immigration status and national origin is illegal in any public accommodations, employment, and housing. According to the guidance, public accommodations include “businesses such as restaurants, fitness clubs, stores, and nightclubs, and other public spaces, like parks, libraries, healthcare providers, and cultural institutions.”

“This new legal enforcement guidance will help ensure that no New Yorker is discriminated against based on their immigration status or national origin,” said Deputy Mayor Phil Thompson in a statement on Sept. 26.

BREAKING:
New York City has made it illegal to threaten to call ICE based on a discriminatory motive or to tell someone “go back to your country.” Hate has no place here. pic.twitter.com/8PaIozjQty

Under the guidance, phrases such as “illegal alien,” and “go back to your country” used with the intent to “demean, humiliate, or harass” a person is illegal under the law. Moreover, it states that harassing or discriminating a person based on their use of another language or their limited English proficiency is also against the law.

In its 29-page directive, the commission lists several examples as to what would constitute a violation of the law, which includes harassing people based on their immigration status or discriminating someone based on their accent.

The guidance has been criticized by several political pundits and politicians following its announcement.

Rep. Mo Brooks (R-Ala.) weighed in on the directive, saying on Twitter: “THIS IS WHY WE FIGHT! NYC bans use of term “illegal alien” to describe illegal aliens. Penalty: fines up to $250,000! FYI: ‘illegal alien’ is the legal definition used in the United States Code!”

Similarly, #WalkAway campaign founder Brandon Straka reacted on Twitter to the announcement saying, “NYC has waged a war on free speech, black citizens, Hispanic citizens, & low income citizens in one swoop. Now that NYC is policing speech, nobody is allowed to talk about how low income black &hispanic citizens are most harmed by illegal aliens.”

According to the Heritage Foundation, the term “illegal alien” is used in federal immigration law and the U.S. Supreme Court in their decisions. Under 8 U.S. Code § 1101, the term “alien” is defined as “any person not a citizen or national of the United States.”

Federal immigration officials have reported record highs in the apprehension of illegal immigrants at the border in the past months, saying that the numbers have overwhelmed border patrol facilities and resources. In May, border patrol agents apprehended or deemed inadmissible over 144,000 people crossing from Mexico—which were record high numbers.

The number of people apprehended or deemed inadmissible has been steadily falling after President Donald Trump pushed Mexico, through the threat of tariffs, to put more focus on the humanitarian crisis.

According to the city of New York, 37 percent of it’s population was born outside the United States, and 16 percent of the population are noncitizens. New York City is also a sanctuary city, which refers to a city that limits its cooperation with ICE to enforce immigration law.